Cockroaches closed down another Florida restaurant, said a report. My Cleaning Products suggested the use of Roach Bully to kill roaches fast and prevent its worse health effects. 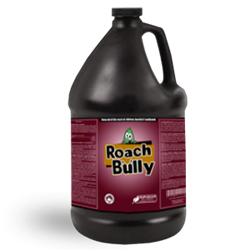 Unlike most pesticides, Roach Bully is organic-based...it is even on EPA's FIFRA 25(b).

Another restaurant in Florida was found infested by cockroaches. As a result, it was forced to shut down, said a report from nwfdailynews.com. Meanwhile, in order to help the public kill roaches fast without the help of harmful chemicals, My Cleaning Products suggested the use of Roach Bully.

The report was published on April 29, 2014. And based on it, the restaurant, which serves Thai cuisine, was shut down last week.

Particularly, it was the Florida Department of Business and Professional Regulation that ordered the closure of the establishment, relayed the post. It detailed that it took place following the inspection on April 21.

According to the report, there were 60 dead roaches found in the kitchen and the buffet area of the restaurant. And all throughout the place, it relayed that more than 20 live ones were found.

As it also related, following the first inspection, the business failed to pass the next one as well on April 22. However, after passing the third checking on April 23, it shared that it was allowed to finally reopen.

“Another local restaurant was temporarily closed last week due to problems with cockroach infestations."

"Lotus Thai received the emergency closure after failing a random health inspection by the Florida Department of Business and Professional Regulation.”

The reason why restaurants found with roaches are closed is the fact that those pests bring with them numerous health risks. My Cleaning Products explained that as they roam in various places, they carry with them and spread bacteria and germs.

Given that, it stressed that they must not be allowed in houses as well. Once found, it advised the public to kill roaches fast in order to prevent the worse of their health effects.

Nevertheless, MCP only recommended one roach spray – Roach Bully. It asserted it is the best product for cockroaches as it could eliminate them and their young and eggs fast even though it contains no harsh chemicals.

It elaborated that unlike most pesticides, Roach Bully is organic-based. It pointed out that it is even on EPA's FIFRA 25(b). And with that, it assured that it is also safe.

To try, MCP invites everyone to visit its website at mycleaningproducts.com and a Roach Bully Complimentary Sample.