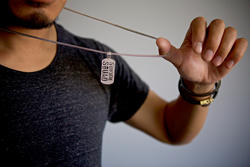 King Ice, a leading men's jewelry brand, and Warner Bros. Consumer Products on behalf of DC Entertainment, will release an 8-piece character collection based on Warner Bros. Pictures’ action adventure film Suicide Squad. The line will provide fans another way to interact with their favorite characters, including The Joker, Deadshot, Harley Quinn and more.

King Ice will develop a series of 3D-design pendants, each built to match the flare and imagery of these iconic characters, from The Joker’s sinister laugh to Batman’s iconic cowl. The goal and direction of the line aims to target both casual and hard core fans alike while allowing King Ice to exercise its artistic creativity to match the attributes and look of each individual character.

Unlike other jewelry lines King Ice makes, the Suicide Squad collection will use carbon fiber as its base material, giving the pendants both durability and a lightweight feel. Meanwhile, the matching bail will provide a large enough opening for 2.5mm Franco chains that the jewelry company will pair with each piece. The line will target the contemporary and streetwear jewelry industries for men ages 18+.

According to Cuong Diep and Derek Belay, co-owners of King Ice, “We felt doing a collection for Suicide Squad could give fans of the film something unique. More importantly, it would give us a chance to work with some of the most iconic characters in the DC Universe.”

Warner Bros. Consumer Products, a Warner Bros. Entertainment Company, is one of the leading licensing and retail merchandising organizations in the world.

DC Entertainment, home to iconic brands DC (Superman, Batman, Green Lantern, Wonder Woman, The Flash, etc.), Vertigo (Sandman, Fables, etc.) and MAD, is the creative division charged with strategically integrating across Warner Bros. and Time Warner. DC Entertainment works in concert with many key Warner Bros. divisions to unleash its stories and characters across all media, including but not limited to film, television, consumer products, home entertainment, and interactive games. Publishing thousands of comic books, graphic novels and magazines each year, DC Entertainment is one of the largest English-language publishers of comics in the world.

King Ice is a streetwear lifestyle brand based in LA. It offers original designed jewelry and accessories featuring street-inspired themes. King Ice has worked with celebrities, like Snoop Dogg, The Game, Chris Brown, Katy Perry; television shows like ESPN and X-Factor; and retailers like Zumiez, DrJays and Jimmy Jazz. Look for new releases by following King Ice on Instagram, Facebook and Twitter.