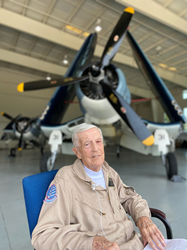 Museum Director Keegan Chetwynd explains, "It is so exciting to be able to host Obie and his historic war-time Corsair at the Museum alongside our Corsair which he flew regularly until he turned 85."

Charles “Obie” O’Brien earned his Wings of Gold at NAS Pensacola in June, 1950 flying former WWII-era trainers and fighter aircraft. As the jet age was emerging, he was assigned to a jet training unit and trained in the Navy’s version of the Lockheed Shooting Star. On completion, he was expecting to be assigned to a jet squadron and when he received his orders, he had been assigned to a propeller driven Corsair unit! As he says, “Go figure!”

Obie was assigned to a Corsair Squadron on the USS Lake Champlain (CV 39) and then USS Boxer (CV 21) and flew 24 missions over Korea. Three of those missions in the F4U-4 Corsair BuNo 97359 and at the end of his deployment in Korea, he was asked to fly this Corsair off the carrier to its next assignment at another Naval Air Station. That’s the last he saw it for nearly 50 years.

O’Brien went on to fly jets and amassed over 7,000 flight hours in 52 different aircraft types. He successfully executed 735 arrested landings on 20 different aircraft carriers! He joined the Military Aviation Museum as one of its first volunteer pilots and was often referred to as the “Corsair Guy.” Obie also holds the honor of having been the only pilot in the world to actively fly a Corsair he once flew in combat up until when he retired in 2013 at the young age of 85.

His wartime Corsair served in various Navy and Marine squadrons before being sold to civilian owners. It’s history continued as one of the Corsairs in the 1970’s TV Show “Black Sheep Squadron.” It passed through several more hands before it was purchased by former Naval Aviator Doug Matthews who had it repainted to represent the Corsair flown by VF-32 pilot Lt (j.g.) Thomas Hudner on his Medal of Honor mission of December 4, 1950. Matthews was the first to learn of the connection Obie had with this Corsair in the 1950’s and without hesitation said, “Well, he has to fly it again!” The aircraft changed hands several times again and was finally acquired by the American Honor Foundation, who chose to honor Obie and his VF-44 squadron-mates, by repainting the Corsair to represent how it appeared in the Korean War. With Obie’s name on the canopy rail, the combat veteran fighter made its public debut at EAA AirVenture Oshkosh 2021, featured at the famous Warbirds In Review on July 23, 2021.

Obie’s original Corsair will arrive at the Military Aviation Museum around noon this Sunday and will be paired with the museum’s Corsair at 2pm for a public meet and greet, media interviews and a historic photo opportunity with both Corsairs. Obie, along with current and previous owners of Corsair ‘359, will be on hand to share the history of both pilot and plane. At 3pm, both Corsairs will launch for a flyover and photo flight.

Museum Director Keegan Chetwynd explains, "It is so exciting to be able to host Obie and his historic Corsair at the Museum alongside our Corsair which he flew regularly until he turned 85. Seeing two of these airplanes together is a rare occurrence, but to have someone here who actually flew one in combat share their story makes it all the more special."

About the Military Aviation Museum: A 501 (c)(3) not-for-profit organization, the Military Aviation Museum is home to one of the world’s largest collections of airworthy military aircraft from the first 50-years of flight. Truly a living museum, its aircraft are in restoration at facilities around the world. Besides the main Museum, the Virginia Beach complex features additional exhibition spaces, including a mid-1930s Luftwaffe hangar originally from Cottbus, Germany, which now serves to house the Museum's collection of WWII-vintage German aircraft. Additional structures include the WWI Hangar, and the original control tower from RAF Goxhill built in England in 1942. Visit http://www.militaryaviationmuseum.org for more information or call 757-721-7767.