Recent release “I Will Always Watch Your Six” from Page Publishing author Krystal May is an engrossing work of fiction that begins amid the lush but deadly Amazon rain forest, where Lia Piece is searching for an as-yet undiscovered archeological site. When she and one of her companions are abducted and held as prisoners by a criminal gang deep in the jungle, her only hope for survival is a daring rescue by Navy SEAL Hawke Night. 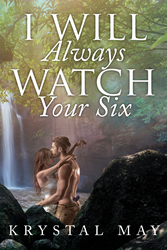 Krystal May, a Michigan native now living with her husband in Wyoming, has completed her book “I Will Always Watch Your Six”: a riveting tale of danger and romance as two people are drawn inexorably toward one another despite all the reasons to stay away.

For Archaeologist Lia Pierce, all that and more comes to mind when she suddenly finds herself in the wrong place, wrong time scenario that lands her in a wooden cage, beaten, battered, and bedraggled. She had set out to find an ancient mysterious dig site said only to be a legend, but the Brazilian rain forest held more danger than just the creatures of the night. Now Lia must rely on the one thing she has tried her entire life to avoid. When a man with a Navy SEAL uniform and a steel grip breaks her from her prison, she finds him not only an honorable man but one hell of a tempting package. Oh yes, he is as sexy as they come with his own attitude to match hers. But she won’t make this SEAL’s job easy to keep her safe.

Petty Officer Hawke Night is not a man to lose focus over a woman, but when it comes to this fiery hot-tempered woman, all common sense goes right out the window. She drives him crazy, but the more he tells himself to back off, the more he feels the pull to be closer to her. If he doesn’t strangle her first that is… But that is only one challenge of many. Not only does he go against everything he is to keep her safe, but he also learns that the trouble doesn’t just end in the jungle. His job just became a hell of a lot harder when he is faced with more than one enemy, wanting her dead and a woman who has not only blindsided him but also becomes the biggest pain in his ass that he never saw coming. She may not want to want him, but she is damn well going to have this SEAL watching her six.

When it comes to this sassy, strong, beautiful five-ten woman, Hawke takes on a deathly crash collision course straight into a brick emotional wall…

This woman should come with her own warning label…

So honorable, even his blood should be red, white, and blue…

Readers who wish to experience this engaging work can purchase “I Will Always Watch Your Six” at bookstores everywhere, or online at the Apple iTunes store, Amazon, Google Play, or Barnes and Noble.