A newly published blog from Retirement advisor Michael Ladin spells out some significant differences between the two accounts that can have important implications for retirees' finances. 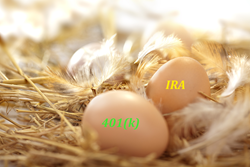 Upon retirement, savers can follow a few strategies to help minimize taxes on withdrawals on 401(k) and IRA accounts.

Retirement advisor Michael Ladin of Ladin Financial Group released a new blog titled, “6 Ways Roth IRAs are different from Roth IRA,” a quick study for pre-retirees with one or both of the retirement savings vehicles to help clarify important differences between the two.

According to Ladin, individuals who contribute to a Roth 401(k) or Roth IRA can watch their savings grow without the burden of paying taxes on it each year. Additionally, upon retirement, savers can follow a few strategies to help minimize taxes on withdrawals on these accounts.

The 401(k) match will be deposited in a traditional 401(k) account, and the account holder will owe income tax on the employer contributions and the investment earnings when they withdraw the money from the account. There's no option to get matching funds on Roth IRA contributions.

Roth IRAs don't have withdrawal requirements. One of the major perks of saving for retirement in a Roth IRA, according to Ladin, is that there are no withdrawal requirements in retirement. The earnings will continue to grow tax-free until the account holder withdraws the money or passes it on to their heirs. However, distributions from Roth 401(k)s are typically required each year after age 70 ½. If the account holder is still working for a company in which they do not have an ownership stake, they can delay withdrawals from the Roth 401(k) until they actually retire.

When an account holder takes an early withdrawal from a Roth IRA, their nontaxable contributions to the account are distributed before the taxable earnings. If they don't withdraw more than the amount they contributed to the account, they won't owe income tax on the distribution. Early withdrawals from Roth 401(k)s are prorated between contributions and investment earnings, so a portion of an early Roth 401(k) distribution is likely to be taxable. However, the account holder might be able to get around the tax if they instead take a loan from their Roth 401(k), which is not a taxable event unless they don't repay the loan on time. Loans from IRAs are not allowed.

Both a Roth 401(k) and Roth IRA can be used to create tax-free retirement income. The money in these accounts can be withdrawn without tax implications once the account holder reaches age 59 ½ and the account is at least 5 years old. However, it's important to pay close attention to the idiosyncrasies in the rules before selecting which type of Roth account to use.

To learn more about strategies for market volatility, visit the Ladin Financial Group website, email Michael(at)ladinfinancialgroup(dot)com or info(at)ladintax(dot)com, or call (305) 444- 4898.

About Ladin Tax and Financial Group:

The host of Retirement Radio’s “Strategies for Financial Success” on NewsTalk 610 WIOD, Saturdays at 7 a.m., Sundays at 1 p.m. Ladin co-authored the best-selling book, “The Ultimate Success Guide,” with Brian Tracy. He has been quoted in major publications, such as the Wall Street Journal and USA Today.

Since beginning his career in the financial services and insurance business more than 20 years ago, Ladin has built a reputation as a respected public speaker and consultant.