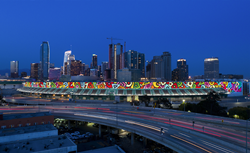 The large art collaboration – painting the panels and discs – is a group effort to demonstrate tangibly the power of community teamwork and civic engagement.

If you drive by the 10 and 110 freeways today entering or exiting downtown, you will see the final Portraits of Hope art panels being installed on the 4-football field long curved wall at the LA Convention Center. The new artwork is transforming the vistas of Los Angeles. The GES-led installation with contributions from union Local 831 and Freemen will go throughout the day.

The project titled, Shaping LA, is Portraits of Hope’s first major project within the city of LA since The Spheres at MacArthur Park. Children and broad swaths of the LA Community have been participating in Portraits of Hope civic and public art sessions at the POH HQ at the South Bay Galleria and recently at the Westside Pavilion for the largest panels.

This Portraits of Hope initiative is a continuation of the program’s large-scale, national projects which have brightened and visually transformed public settings and symbols ranging from the NYC taxi fleet, blimps, planes, lakes, and buildings to LA’s coastal lifeguard towers, urban laundromats, animal shelters, and frontline fire and rescue vehicles by working with organizations from NASA to NASCAR.

What: Final art panels will be installed and complete the large curved wall at the LA Convention Center.

The 31-ART panel installation on the 4-football field long curved South Hall wall now enhances one of LA’s most dramatic vistas as a burst of color fronts the new downtown skyline. 650,000 vehicles entering and exiting downtown go by the curved wall everyday – or nearly 20 million vehicles a month.  The project also extends to multiple areas at the LACC and has involved nearly 7,000 children and adults throughout Los Angeles who have participated in the initiative’s program activities that included painting the art panels and art discs now on site.

For 20 years, Portraits of Hope has served and engaged children and adults in schools, hospitals, social service programs, and community groups in large-scale civic collaborations that transform public environments and iconic settings.  Portraits of Hope works with a variety of populations in its initiatives, reflecting the program’s integrated themes of public art, civic education, creative therapy, community-building, and teamwork.  This Portraits of Hope project is a continuation of the program’s large-scale, national projects which have brightened and visually transformed public settings and symbols raging from the NYC taxi fleet, blimps, planes, lakes and buildings to LA’s costal lifeguard towers, urban laundromats, animal shelters, and frontline fire and rescue vehicles by working with organizations from NASA to NASCAR.

Founded by brothers Ed Massey and Bernie Massey, Portraits of Hope has involved tens of thousands of children and adults and more than 1,000 schools, hospitals, and social service programs in its large-scale civic collaborations and initiatives.

Shaping LAincludes artwork created during sessions with the Braille Institute, Wayfinder – Junior Blind, Special Olympics, Rancho Los Amigos National Rehabilitative Center, and theAdvantage program. Many children and adults involved in Portraits of Hope have experienced an array of medical or physical challenges. To meet the individual needs of persons with disabilities, the program has developed specialized painting brushes and techniques including telescope paint brushes for those in wheel chairs or attached to IVs, the shoe brush TM for individuals unable to manipulate a brush with their hands, and fruit flavored mouth brushes for kids and adults with limited movement in their limbs. For persons visually impaired, POH texturizes art panels or utilizes other techniques.

In schools, Portraits of Hope engages students in grades 3-12 in interdisciplinary education sessions in which they assess, discuss, and communicate their thoughts on social issues affecting their communities and the world.  On site at the Los Angeles Convention Center are examples of program activities depicting efforts to achieve model community resource allocations and persuasion statements by students who identified issues they believe should be prioritized.  The large art collaboration – painting the panels and discs – is a group effort to demonstrate tangibly the power of community teamwork and civic engagement.

Geometric shapes are the core design elements of the project, as the young participants will be responsible for “shaping” the future.  The flower is also core to the program as the universal symbol of joy, hope, beauty, life and renewal.

After six months, the artwork will be donated primarily to social service institutions to beautify their environments.

Portraits of Hope graciously acknowledges the City of Los Angeles Department of Convention and Tourism Development which championed the effort throughout.

About Portraits of Hope:

Portraits of Hope, a 501 (c)(3) program, develops high-profile motivational art and civic projects that merge the production and exhibition of dynamic public art with creative therapy for hospitalized children, civic education for students in schools, and community engagement opportunities for people of all ages. Founded by brothers Ed Massey and Bernie Massey, the Portraits of Hope program is aimed at enriching the lives of children and adults - many who may be coping with serious illness, disabilities, adversity, or socio-economic challenges - through their participation in creative, educational, high-profile, one-of-a-kind projects. Portraits of Hope has involved tens of thousands of children and adults in huge civic collaborations - in the U.S. and abroad – that have visually transformed everything from airplanes, lakes, buildings, tugboats, animal shelters, and the New York City taxi fleet to LA’s coastal lifeguard towers, race cars, blimps, laundromats, and frontline fire and rescue vehicles, by working with organizations from NASA to NASCAR. More than 1,000 hospitals, schools, and social service agencies have directly participated in Portraits of Hope projects in addition to a broad array of adult civic groups.