Dating can be such a cruel game and while everyone denies that physical appearance has anything to do with how much they "want" someone else, the sad truth is that it usually does matter. Money and looks aren't something that Sarantos desires and in the end, they literally do not matter. 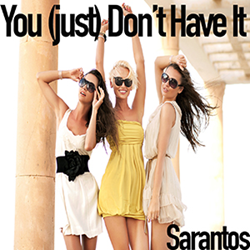 Sometimes, there are nice guys in the world who aren't bewitched by sexy, hot rich girls who just aren't nice on the inside! They do exist.

Sarantos Releases A New Pop Top 40 Song " You (just) Don't Have It" Pointing Out That Men Do Sometimes Care About What's On The Inside.

Dating can be such a cruel game. While everyone denies that physical appearance has anything to do with how much they "want" someone else, the sad truth is that it usually does matter. As a teen, young adult or mature adult, dating can be a formidable challenge. Sometimes, though, there are people who do actually care more about what's on the inside vs. what's exposed on the outside. This theme befittingly takes center stage in October when Halloween masks are sure to be seen everywhere as people get the opportunity to be someone else for one night of the year. And it sure is fun to pretend to be someone else sometimes, is it not?

This latest pop song is very playful by nature. No matter how much that perfect stuck-up rich girl wants Sarantos, she just doesn't have what he really wants. Well, what exactly is that fans ask?? The song goes on to describe exactly what it is Sarantos seeks - a humble human, playful, not lazy, sweet and nice, with passionate eyes... Money and looks aren't something that Sarantos desires. In the end, they literally do not matter!

"This is a fun top 40 pop song about women who are used to getting what they always want" says Sarantos. "Theses women are popular, famous and rich. But for him, they just don't have it. They don't have that one thing that he needs. I think this song strikes at the heart of the bone fide paradox that physical appearance plays in all of our daily decisions, perceptions and motivations. Studies show that attractive people are perceived as smarter, that rich people are seen as more attractive, but what does it all really mean? Who genuinely cares anyway? I'm here to warn you that generalizations like this can lead people to blindly rationalizing preconceived stereotypes while furthering a self-fuflilling prophecy. Oh and by the way, sometimes, there are nice guys in the world who aren't bewitched by sexy, hot rich girls who just aren't nice on the inside! They do exist."

33% of any music-related sales profits from this song are going straight to Girl Effect.

Girl Effect works to break the cycle of intergenerational poverty. They do this by connecting girls to each other and to the critical assets they need. They work to create lasting perception change by harnessing media in innovative ways and building social networks to develop girls' positive perceptions of themselves and shift how others see and value them.