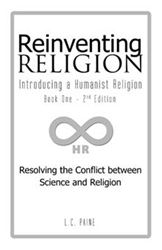 Dissatisfied with the current state of religion and wanting to devote his life to making a contribution that improved upon this, L.C. Paine devoted himself beginning in 1994 to developing a comprehensive body of written work meant to provide new leadership in religion. “It is religion that must change, not science,” he writes as he begins his book “Reinventing Religion - Book One - 2nd Edition” (published by iUniverse).

Paine’s book advocates a paradigm shift in how people should think about and practice religion. In it, he proposes that the best way to resolve the conflict between religion and science is to simply build for mankind a new reason and ethics based religion. He argues that there is a need for a new beginning in religion and that it is best to improve religion from the inside. “Reinventing Religion” then introduces the specifics for a new Humanist Religion.

“We live in a world where blindly trusting in traditional believing is leading us into self-destruction,” says Paine. In writing “Reinventing Religion,” he hopes to turn people away from this apocalyptic path while preserving religion and religious morality by simply improving upon them.

About the Author
L.C. Paine was born in 1953, in the Midwest of the USA. He was brought up Catholic, and recognized he was an atheist at the age of 14. He is currently an atheist with agnostic leanings. He is a self-made philosopher, a scientific humanist who sees himself as progressive, practical and tough-minded. “Reinventing Religion - Book One - 2nd Edition” is his debut book, and the first book in a planned series.