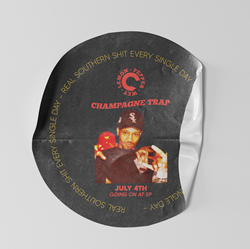 We’re excited to partner with LPW while also supporting some of the music industry’s best D.J.s. - Cinq's Barry Daffurn

Lemon Pepper Wet is an experiential series of events curated by longtime industry staple and Southern culture icon Paris Kirk. LPW represents a celebration of the Southern experience in its truest form. Because of Covid-19, Lemon Pepper Wet has opted to continue its mission highlighting the best in Southern music, food, and fashion online on the Fourth of July.

“The team is excited to partner with Cinq Music Group for our first virtual LPW,” says Kirk. “Hosting this in Atlanta at a creative hub like Cam Kirk Studios, people from around the world will get an opportunity to feel what real southern culture feels like.”

For its part, Cinq Music has long wanted to partner with Lemon Pepper Wet. All our A&Rs are big fans, attending all of their events.” says Cinq co-founder Barry Daffurn. “We’re excited to partner with LPW while also supporting some of the music industry’s best D.J.s. I want to thank each of them in advance for providing us some great Hip-Hop music and a taste of Southern culture on the Fourth.”