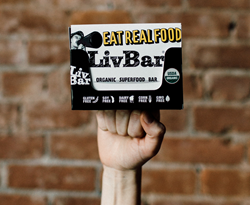 LivBar has seen whirlwind growth in 2020, and bars are now available in every state in the US. They continue to expand their footprint into larger retailers beyond the natural food sector including the traditional grocery and convenience store segments. Over the next month, LivBar will be launching in Lowes Foods (East Coast), Piggy Wiggly (South East), and Plaid Pantry (Pacific Northwest).

Created by Jan Johansen, a practicing nutritionist in Salem, Oregon, in 2012, she was ahead of her time using organic superfoods and compostable packaging from the very start. Over the last eight years, the market has made major shifts into the fast-moving current that LivBar was founded in.

LivBars are innovative in the bar space as one of the few baked bars and fall in the sweet spot between hard nut bars and soft date paste bars. They are all plant-based vegetarian with two vegan options.

“All this growth has been personally overwhelming,” Johansen said. “I always hoped, but never anticipated, how many people are taking their health seriously and looking for organic, real food alternatives, that are good for their bodies, minds, and the environment.”

LivBar has rapidly gained momentum since early 2019 to expand the brand, gaining national distribution in UNFI, KeHE, DPI, Core-Mark, and McLane, and also winning an impressive string of awards, including Entrepreneur of the Year, Most Mindful Consumer Packaged Good, and Oregon Organic Processor of the Year.

About LivBar®
LivBar was founded in 2012 in Salem, Oregon, by two nutrition and fitness experts, Jan and Gabe Johansen. Jan was challenged to find any truly healthy energy bars she could recommend to her clients, so she created the LivBar recipes. LivBars are crunchy and chewy and come in five delicious superfood flavors: Coffee Maple Cacao, Raspberry Kale Maca, Blueberry Vanilla Kale, Ginger Lemon Turmeric, and Lemongrass Cherry Matcha. For more about LivBar, visit LivBar.com or check out our social media channels: Facebook, Instagram, Twitter, & LinkedIn.

About Plaid Pantry
Plaid Pantry is a locally owned and operated 108 location convenience store chain based in the greater Portland Oregon area, with stores ranging from Salem, Oregon to Seattle, Washington. They carry the widest variety of beverages and snacks of any local convenience store and have recently added many organic, GMO-free, fair trade and other healthier choices to their stores.

Lowes Foods
Lowes Foods began in 1954 as a single store in North Wilkesboro, NC, and has grown to become a major supermarket chain operating in North Carolina, South Carolina and Virginia. The company grew rapidly during the 1960s, '70s and early '80s. Lowes Foods was acquired by Merchants Distributors, Inc. (MDI) in 1984 and began an aggressive expansion program in 1986, opening 19 stores over the next four years. In 1997, Lowes Foods acquired Byrds Food Stores, located in eastern North Carolina. It continued its growth in 2000 with the purchase of 13 Hannaford stores. Today Lowes Foods operates close to 100 stores and continues to open new stores throughout North and South Carolina.

Piggly Wiggly
Piggly Wiggly®, America's first true self-service grocery store, was founded in Memphis, Tennessee in 1916 by Clarence Saunders. Saunders' reason for choosing the intriguing name “Piggly Wiggly®” remains a mystery; he was curiously reluctant to explain its origin. Someone once asked him why he had chosen such an unusual name for his organization, to which he replied, "So people will ask that very question." Regardless of his inspiration, he succeeded in finding a name that would be talked about and remembered. Today there are more than 530 Piggly Wiggly stores serving communities in 17 states. All Piggly Wiggly® stores are independently owned and operated, and though they are located primarily in the Southeast, there are Piggly Wiggly® stores and as far north as Wisconsin.