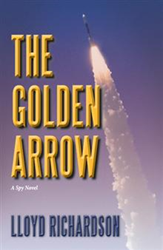 If you like spy thrillers, I think you will find this book to be a satisfying and realistic story about hands-on agents getting down in the dirt in remote parts of the world.

Spy novels are often full of thrills and secret operations, but they don’t always feature real-life government policy that supports the plot. Taking place across central and southwestern Asia, including Turkey and Iran, author Lloyd Richardson’s new novel “The Golden Arrow: A Spy Novel” (published by Archway Publishing) draws from the author’s experience in diplomatic and international affairs.

Richardson was a diplomat during Ronald Reagan’s presidency. He was a lawyer with global clients for more than 20 years and held diplomatic posts abroad. As an adviser to the U.S. government, he implemented infrastructure development projects in emerging market countries. These real-life experiences molded the plot, characters and settings of “The Golden Arrow.”

Protagonist Adam Chin is a U.S. intelligence operative dispatched by the Secretary of State to deal with her most difficult and sensitive diplomatic issues. Colonel Supriya Lal is an intelligence operative for India’s foremost military intelligence organization. Together, the pair take on the world’s most vicious enemies of democracy. An Iranian nuclear threat to Israel’s survival propels the pair to action as they travel the globe, hunting down those behind the threat.

“If you like spy thrillers, I think you will find this book to be a satisfying and realistic story about hands-on agents getting down in the dirt in remote parts of the world,” Richardson says.

Readers can learn more about the author and his work at http://www.lloydrichardson.com.

About the Author
Lloyd Richardson brings three decades of experience in international affairs to his writing on American intelligence. He is fluent in Chinese and has occupied diplomatic posts abroad and at the United States State Department, where his last assignment was as staff assistant to the Director of the Secretary of State’s policy planning staff. He lives with his wife in Beaufort, South Carolina. He is the author of “Dragon’s Paw.”

Archway Publishing is a supported self-publishing alliance between leading global publisher Simon & Schuster and Author Solutions, LLC. For more information about publishing your book with Archway Publishing, please visit archwaypublishing.com or call 888-242-5904. For the latest news, follow @ArchwayPub on Twitter and “Like” us at facebook.com/ArchwayPublishing.