Get New Years Eve Tickets For London Grooves NYE Old Skool Party at the Anthologist in the City of London!

Party promoters London Groove are looking forward to hosting their NYE Old Skool Party at the Anthologist and kicking off 2015 in fine style with a rich mix of 80s, 90s and early 00s R&B, Swingbeat, Hip Hop, Old Skool Garage and more this New Years Eve. 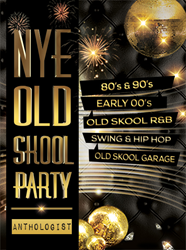 London Groove is back for yet another New Years Eve extravaganza having sold out parties in the capital year after year.

For the past decade LG have moved the capital with their Soul Friday and Soul Saturdays weekly parties uniting like-minded people eager to celebrate birthdays, hen parties and just a regular night out.

Following the success of their sold out Old Skool party at Yager Bar recently and due to public demand, all roads will be leading to the Anthologist on New Years Eve for their London Groove NYE Old Skool Party in the City of London.

Musically the likes of Chris Brown, Rihanna, and Drake will not be on the playlist as LG owner &amp;amp; veteran DJ Steve Back 2 Basics will be doing a marathon 5hr set including the 80s anthems from Luther Vandross, Whitney Houston, Cameo, Bobby Brown to 90s classics from Mantronix, Snoop Dogg, Guy, Blackstreet, TLC, Mary J Blige, Aaliyah, TLC, Usher and many more at this ticket only event.

Everything from the 80s to 00s will be warming up the crowd in the lead upto the infamous countdown to midnight when the crowd will scream and shout celebrating the arrival of 2015.

Tickets are priced at £20 each plus table and booth reservations for 8 or more people are selling fast so be sure no to miss out on this massive old skool party to remember.

This release has been bought to you by London Groove Ltd, who are nightclub and party promoters putting on three club nights every weekend which are Fridays at Yager Bar and Saturday night at The Anthologist and Dado 54 which are all in the City of London.