Book tickets to party with one of the most popular UK Garage Duos DJ Luck & MC Neat as they spin classic London Groove garage anthems such as ‘A Little Bit of Luck’ and many more on Friday 16th August. 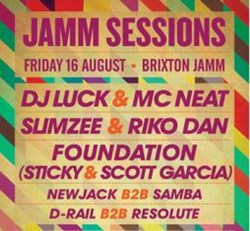 UK Garage fans have always enjoyed partying across the London night clubs, so it comes as no surprise that tickets are selling fast for ravers to attend Brixton Jamm on Friday 16th August.

DJ Luck and MC Neat are no stranger to the party scene, there high energy combination of Neat on the decks and Luck on the microphone has always stirred crowds into a frenzy on dance-floors everywhere they go.

It was inevitable that these guys would extend their talents of playing music to making it with the release of their debut single in 1999 ‘A Little Bit of Luck’ which went from being a promotional dubplate sold for £5 to a top ten hit peaking at no.9 in January 2000.

Several hits followed for the duo including their cover of ‘Ain’t No Stoppin’ Us Now’ which charted at no.8 and the summer anthem ‘Piano Loco’ which was played across many clubs in London and featured on various compilation albums which till present day always generates royalties for the lads.

Luck & Neat may not be in the charts as much anymore but there still in heavy demand across worldwide dance-floors with residency’s out in Ayia Napa at Club Ice over the summer seasons spinning the biggest anthems played across nightclubs in London.

Be sure to book tickets for this rare UK appearance as Jamm Sessions presents DJ Luck & MC Neat with early bird prices starting at £5 in advance.

This news release has been brought to you courtesy of London Groove, event promoters for the London party circuit hosting three R&B parties in the City of London every weekend.

The bespoke agency also has a dedicated website which, aside from providing bookings, allows guests to browse the latest pictures from the London nightlife scene and also includes daily fashion, and celebrity gossip updates.

London Groove’s club nights are the ultimate destination in the City of London attracting over 900 party goers to their club night every weekend. Their style and luxurious feel mean you can make the most of London Groove's parties and have fun in three of the Cities' best venues where anyone and everyone can enjoy a night of fun.

"Also teaming up with Huntingdon and Cambridge DJs Clarity Events is a great partnership and something we’re looking forward to,” commented Steve Prashad, Director and founder of London Groove.