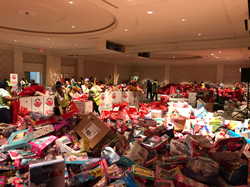 Houston Fire Department’s Communications Supervisor, Paul Box said, “The Cabrera Family and Los Cucos have been a great support to this event for many years. Without all of our sponsors and volunteers, this event wouldn’t even be possible.”

Los Cucos Mexican Restaurant donates over three hundred meals and catering services to the Houston Fire Department’s (HFD) annual toy drive, Operation Stocking Stuffer, on Saturday, December 21st. Los Cucos’ annual commitment to participate in this event is a way for their team to spread joy to HFD staff and volunteers who impact upwards of 30,000 children on Christmas every year.

Operation Stocking Stuffer is an annual toy drive hosted in downtown Houston by the Houston Fire Department. Each year, they collect thousands of toy donations from a variety of sponsors, who make it possible for the HFD to make a huge impact with families in the community who are struggling. This Saturday, the HFD anticipates they’ll get to help over 7,000 families have gifts under the tree for their children on Christmas. Operation Stocking Stuffer relies on the efforts of both sponsors and volunteers, who work diligently year after year to sort toys, help facilitate the toy drive on the day of the event and so much more. Some of this year’s notable sponsors include Shell, KPRC Channel 2, New Light Christian Center, KRBE, Entercom Radio, and the University of Houston.

Los Cucos and owner Sergio Cabrera Jr. are passionate about supporting the community. For the past seven years, Los Cucos has been the food sponsor for the over 300 volunteers and firefighters who make the toy drive possible. Their fajita buffet is always a hit, but it doesn’t stop there. Los Cucos also provides a fully-staffed catering team to help pass out food.

About their partnership, Houston Fire Department’s Communications Supervisor, Paul Box said, “The Cabrera Family and Los Cucos have been a great support to this event for many years. Without all of our sponsors and volunteers, this event wouldn’t even be possible.” To learn more about the Houston Fire Department’s Operation Stocking Stuffer, visit http://www.houstontx.gov/fire/toydrive.

The history of Los Cucos Mexican Cafe is an inspiring story of perseverance and success. It's a story of two brothers, Sergio and Manuel Cabrera who came to Houston, Texas, looking for the "American Dream." Their dream became true through lots of hard work, dedication, and determination. By setting goals for success and providing the best quality in food and the best possible service to each and every customer since 1991, they have succeeded in turning their dreams into reality. This is the beginning of a business that has consistently grown stronger and continues to grow and thrive today. They currently have over 20 locations throughout the southwest United States and plan to open more in the future. Learn more by visiting loscucos.com.

About The Houston Fire Department (HFD)

The Houston Fire Department was established in 1838 with one station, Protection Company No. 1. It grew to a volunteer fire department status with three stations by 1859. After having provided volunteer firefighting services for 57 years, the City of Houston Fire Department began paying its firefighters in 1895. HFD is the third-largest fire department in the United States and is responsible for preserving life and property to a population of more than 2 million in an area totaling 654 square miles. To learn more visit houstontx.gov/fire/about.