Express Employment Professionals explores the latest trend of job seekers "ghosting" interviews and why low pay may be a contributing factor. 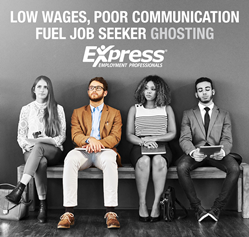 Unemployment is down, wages are up, and “ghosting” is on the rise. According to Express Employment Professionals franchise owners like Lisa Straughan of Longview, Washington, all these trends, compounded by poor communication skills, are connected.

Because jobs are more plentiful and employers have to compete over wages, employees may get multiple jobs offers or interview requests at once and simply not show up—or “ghost”—the ones that are less appealing or pay less.

“I have worked in human resources for 20 years, and have seen a huge increase in ghosting in the last couple of years,” Straughan said. “With so many opportunities, [job seekers] at times accept multiple offers, and there is no accountability if they don’t show.”

According to a new survey of businesses from Express, low pay is indeed one of the top reasons that job seekers will turn down job offers and why employees will leave a job.

In the survey, 26 percent of businesses said that “low pay” is among the things that “stop applicants from accepting a job at your company.” That was second only to “not the perfect fit.”

Similarly, 28 percent cited “low pay” when asked about “what causes an employee to leave a job.” That was third behind “lack of advancement” and “not a good cultural fit.”

In Mobile, Alabama, Express franchise owner Chris Ashcraft agrees that businesses are far more willing to negotiate over pay than in past years and low pay is a “huge” factor when someone declines a job offer. As for actual “bidding wars,” he says those are most common in administrative positions and commercial driver’s license jobs.

Some job seekers will turn down jobs with what they consider low pay even when they don’t have another offer.

“I like to say some money is better than no money, but most of the time they still won’t accept a low-paying position. They’re waiting for a ‘better opportunity,’” Ashcraft said.

Aschraft, too, has seen low pay lead to people “ghosting” interviews and their scheduled first days of work.

Janis Petrini, Grand Rapids, Michigan, Express franchise owner, sees job seekers ghosting interviews at the highest rate in history, often because they have found a better opportunity and fail to communicate that to recruiters.

“I think some of it is generational,” she said. “The younger generation is not used to calling and cancelling or confirming, so they just don’t communicate. Job seekers have so many choices that they don’t think burning a bridge will have negative consequences.”

In Olympia, Centralia and Aberdeen, Washington, Express franchise owner Reid Bates said job seekers in his market often accept a position but continue to hunt elsewhere for the perfect fit. In the current tight labor market, applicants have a heightened sense of their worth to employers — just not necessarily their current one.

“On the plus side, this is leading to improved wages, growth opportunities and even some hiring bonuses,” Reid said. “But, it is also leading to lower levels of loyalty as job seekers ghost their employers and, in many cases, interviews and first day of new employment.”

“Competitive pay is the surest way to ensure you’re hiring a dedicated employee and not a ‘ghost,’” said Bill Stoller, CEO of Express. “Some employers still haven’t recognized how fierce the competition is.
Good talent requires good pay. While that may seem expensive to some employers, investing time in recruiting, interview and hiring ‘no-shows’ can get pretty expensive too.”

The survey of 445 businesses, which are current and former clients of Express Employment Professionals, was conducted in December 2018 to gauge respondents' expectations for 2019.