Has Her Big Writing Break Through International Contest 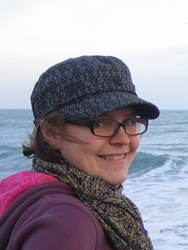 Leena Likitalo of Helsinki, Finland will be honored at the 30th Annual L. Ron Hubbard Achievement awards being held on the 13th of April 2014 in Los Angeles at the Wilshire Ebell Theatre. The event will celebrate the annual winners in the L. Ron Hubbard Writers and Illustrators of the Future Contests, where Leena was the 3rd quarter, first place winner for this year, making it further than some several thousand others, and where her winning story will also be published in the bestselling Science Fiction anthology series – L. Ron Hubbard Presents Writers of the Future Volume XXX. As Leena is a 1st place winner, she will now compete with the other 1st place winners (four in all) for the grand prize of $5,000.00.

Leena has been learning English since she was 16 years old when her father told her that if she wanted to be successful in life, she would need to learn the English language. Years later she bought a Writers of the Future anthology in an airport but her real determination to become an author was the inspiration given to her from Writers of the Future contest winner and now New York Times bestselling author Patrick Rothfuss. She noticed the acknowledgement to the Writers of the Future contest in Rothuff's "Name of the Wind" novel and this inspired Leena to enter the contest. She has been entering now for 2 1/2 years with one Honorable Mention notification for the several stories submitted thus far.

Alongside Leena will be eleven other winners form all walks of life, flown in from all corners of the globe. They will be treated to a week-long workshop taught by the contest blue ribbon panel of judges including Tom Powers (On Stranger Tides), followed by the gala awards ceremony.

The Contests were initiated by L. Ron Hubbard in 1984 shortly after returning to the field of science fiction with his bestseller Battlefield Earth, and to date the contest has launched the careers of 12 New York Times bestselling authors.