Lucid Sight — developer of Play-To-Own games and blockchain game technology — is proud to announce a deal with CBS Interactive to introduce iconic “Star Trek” starships into the digital universe of its space-based game CSC later this year. 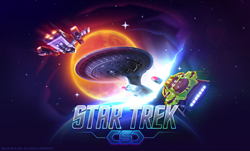 "It is such a privilege to get the chance to bring ‘Star Trek’ into a new frontier with the first blockchain U.S.S. Enterprise."

CSC is an open-universe game where players command starships to mine, harvest, and craft items that are secured by the Ethereum blockchain. For a limited time, a selection of the most recognizable starships from “Star Trek” will be sold as unique digital items.

“‘Star Trek’ inspired me at a young age to pursue a career in technology, it is such a privilege to get the chance to bring ‘Star Trek’ into a new frontier with the first blockchain U.S.S. Enterprise,” said Fazri Zubair, CTO and Co-Founder of Lucid Sight. Blockchain technology provides verifiable digital ownership and enables Play-To-Own economies. This U.S.S. Enterprise and other iconic ‘Star Trek’ ships will be available during a limited-time event.

About CBS Interactive
CBS Interactive, a division of CBS Corporation, is the world's largest publisher of premium digital content and a perennial top 10 Internet company. CBS Interactive's brands span popular categories like technology, entertainment, sports, news and gaming. Properties include the websites, apps and streaming services of the CBS Television Network such as the CBS All Access subscription service, the 24/7 digital news network CBSN, and CBS Sports digital brands as well as digital-first properties in key content verticals, including CNET, TVGuide.com, GameSpot, Last.fm, Metacritic and Chowhound. Follow CBS Interactive on Twitter and Facebook.