Oakland Zoo welcomes two long-awaited American bison bulls with Yellowstone Park genes in an effort to expand the diversity of both captive and free-ranging American bison. 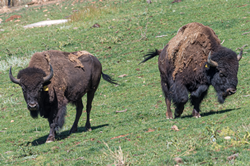 The next-step in this conservation effort includes the recent addition of two new male American bison to the remaining females at Oakland Zoo. These three-year-old males are part of a secondary and separate conservation project led by Dr. Jennifer Barfield of Colorado State University, Ft Collins, to preserve Yellowstone bison genetics. The intent behind the move of these new males is to diversify the genetics of future offspring with Oakland Zoo’s Pablo Allard herd. These future, genetically-diverse calves, along with their mothers, will also be brought bi-annually to Montana to roam freely on Blackfeet Nation land and nearby National Parks in Montana.

The aim of this multi-pronged effort for genetic diversity is to ensure the health and longevity of future American bison generations; the species reached near-extinction in the early 1900s when millions were killed during the westward expansion for grasslands needed to feed livestock. Though their numbers have increased tremendously, herds in the wild and herds in private and public reserves, are quite inbred.

The two new males now at Oakland Zoo have lived together all of their lives as part of the Laramie Foothills Bison Conservation Herd in northern Colorado, helping them create a close bond. This bond was a key factor for why they were chosen to come to Oakland Zoo as a pair. At three years old, the bulls are much larger than the female bison of similar age. The bulls have yet to reach their mature weight and size at about five years of age.

Barfield, a reproductive physiologist and assistant professor in the Department of Biomedical Sciences at CSU, said that she is thrilled about this new partnership with the Oakland Zoo.

The new project has additional ties to Fort Collins. The Oakland Zoo's president and CEO, Dr. Joel Parrott, is a veterinarian and CSU Doctor of Veterinary Medicine program alumnus.
“I am excited to partner with my alma mater to bring Yellowstone Park ancestry to Oakland Zoo’s California Trail,” he said, referring to a 56-acre park in the zoo dedicated to iconic California species, including bison. “Introducing these two bulls to our female herd will bring a more diverse and strong genetic line to the animals we release to be free-ranging on Blackfeet tribal land and U.S. and Canadian national parks through the Iinnii Initiative.”
Thanks to the work of Colorado State University, the City of Fort Collins and Larimer County — partners who manage the Laramie Foothills Bison Conservation Herd — more disease-free bison are being returned to native lands. Some of the bison have been produced using non-surgical embryonic transfer techniques, which increases the genetic diversity of American bison in the wild and captivity while avoiding issues with diseases, and ensures stronger and healthier herds. Oakland Zoo’s conservation project, Iinnii Initiative, is benefitting from these techniques.
Oakland Zoo and Blackfeet Nation partner in educational programs and support mutual interest in promoting bison conservation and cultural preservation with their Iinnii Initiative. This partnership also includes youth exchange for education, fundraising for projects, and promotion of ecotourism programs.

ABOUT OAKLAND ZOO AND THE CONSERVATION SOCIETY OF CALIFORNIA:
Oakland Zoo, home to more than 750 native and exotic animals, is managed by the Conservation Society of California (CSC); a non-profit organization leading an informed and inspired community to take action for wildlife locally and globally. With over 25 conservation partners and projects worldwide, the CSC is committed to conservation-based education and saving species and their habitats in the wild. Oakland Zoo is dedicated to the humane treatment of animals and is accredited by the Association of Zoos and Aquariums (AZA), the national organization that sets the highest standards for animal welfare for zoos and aquariums.

ABOUT THE AMERICAN BISON:
The bison, North America's largest land mammal, once roamed the continent freely, helping sustain plains and prairie ecosystems as a keystone species through grazing, fertilization, trampling and other activities. Bison shaped the vegetation and landscape as they fed on and dispersed the seeds of grasses, sedges, and forbs. Several bird species adapted to or co-evolved with types of grasses and vegetation structures that had been, for millennia, grazed by millions of free-ranging bison. Bison have an important role in America's history, culture and economy. Before being nearly wiped from existence by westward expansion, bison roamed across most of North America. In 1907, President Teddy Roosevelt and the American Bison Society began an effort to save the bison from extinction by shipping 15 animals by train from the WCS Bronx Zoo to Oklahoma's Wichita Mountains Wildlife Refuge. Many Native American tribes revere bison as a sacred and spiritual symbol of their heritage and maintain private bison herds on tribal lands throughout the West. Bison now exist in all 50 states in public and private herds, providing recreation opportunities for wildlife viewers in zoos, refuges and parks and sustaining the multimillion-dollar bison ranching and production business.

ABOUT THE PABLO ALLARD HERD:
The origins of this herd dates back to 1873 when Samuel Walking Coyote of the Pend d'Oreille tribe and three Blackfeet companions captured between four and seven calves orphaned during a hunt on Blackfeet land. Instinctively, with their mothers killed, the calves shadowed the hunter's horses for security, making them easy to capture.
By 1884, Walking Coyote's herd grew to 13 bison. Ten of these were sold to Michel Pablo and Charles Allard and formed the Pablo-Allard herd on the Flathead Reservation. This herd eventually became the largest in the United States, numbering 300 head, and played a key role in the preservation of bison by restocking and supplementing many public conservation herds, including those at Yellowstone National Park and the National Bison Range herd in Montana. When the U.S. Government initiated plans to open the Flathead Reservation to homesteaders in1906, Pablo sought a large grant for grazing land to graze his herd but was denied. He eventually sold his herd to the government of Canada. The animals were shipped to Elk Island National Park by train with the last shipment sent out in June of 1912.

ABOUT THE INTERTRIBAL BUFFALO COUNCIL:
The Inter-Tribal Buffalo Council is a federally chartered Tribal organization dedicated to the restoration of buffalo to Tribal lands in a manner that is compatible with their spiritual and cultural beliefs and practices. ITBC has been working on this mission since 1992. Visit: http://www.itbcbuffalo.com