"MANN-FILTER Mambas” of the Mercedes-AMG brand among leading contenders 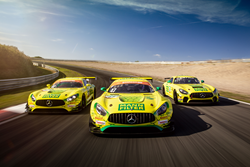 "MANN-FILTER Mambas” of the Mercedes-AMG brand

The Motorsport Team at MANN-FILTER has announced a summary of their eventful 2019 racing season. On five continents and in six different racing series, the yellow-green “MANN-FILTER Mambas” of the Mercedes-AMG brand scored numerous successes.

At the Intercontinental GT Challenge (IGTC), MANN-FILTER driver Maximilian Buhk won third place overall and earned three second-place finishes in the five IGTC season races. "Our Mamba was without a doubt one of the best cars of the season. That makes it easier to forget the disappointment of not having taken the title, and to come back next year even stronger,” said Buhk.

At the ADAC GT Masters, the MANN-FILTER Team HTP succeeded thanks to the strong performance of German-Dutch driver duo Maximilian Götz and Indy Dontje in the second half of the season, taking the victory in the Saturday race at the Sachsenring and claiming third place overall in their Mercedes-AMG GT3. Meanwhile, their team colleagues Philip Ellis and Fabian Vettel finished third, driving the sister car in the second race at Zandvoort in the Netherlands. Bringing home four podium finishes, the MANN-FILTER Team HTP may have fallen short of repeating last year’s title in the team ranking, but they proved that their Mambas count among the top racers in the super sports car league.

The Leipert Motorsport Team also rang up some successes at the ADAC GT4 Germany in their Mercedes-AMG GT4, dubbed the “Baby Mamba.” The win scored by Luca-Sandro Trefz and Morgan Haber at the second race in Hockenheim ultimately lifted the German-Australian crew into fourth place in the overall rankings.

One top-priority event in the season program of MANN-FILTER Motorsport was the ADAC 24 Hours of Nürburgring race held at the Nürburgring’s Nordschleife north-loop track in June. The Mercedes AMG Team MANN-FILTER with Maximilian Götz, Raffaele Marciello, Christian Hohenadel, and Lance-David Arnold drove for almost 19 hours within range of a podium finish. Their Mercedes-AMG GT3 was damaged, however, when it clipped a lapped car, causing driver Maximilian Götz to slam into a guard rail.

In October, Maximilian Buhk and Raffaele Marciello drove the MANN-FILTER Mamba of HTP Motorsport to overall victory at the eighth run of the VLN Endurance Racing Championship at the Nürburgring.

At the International GT Open, where HTP Motorsport hosted a Mercedes-AMG GT3 for Austrians Alexander Hrachowina and Martin Konrad, the team won a commanding second place finish. Early in the year, Hrachowina and Konrad together with drivers Indy Dontje and Bernd Schneider scored the class victory in the A6-AM ranking with an overall 7th place finish at the Dubai 24 Hour Race.

“Although it wasn’t enough to win the championship title, we were right up among the leading contenders in the 2019 motorsports season,” said Dr. Uwe Hartmann, director of brand management at MANN-FILTER. “What’s even more important is the appreciation and camaraderie that our team enjoys with fans, the media, and competitors. Wherever they line up to race, the MANN-Filter Mambas are among the spectators’ favorites. The premium filtration MANN-FILTER brand has firmly established its place in the world of international motorsports. We’re delighted with this standing, and we'll build on it moving forward.”

About MANN+HUMMEL
MANN+HUMMEL is the leading global expert for filtration technology. The company group with its headquarters in Ludwigsburg, Germany, develops solutions for motor cars, industrial applications, clean air in interior spaces and the sustainable use of water. In 2018, the group achieved sales of approx. 4 billion euros worldwide with over 20,000 employees at more than 80 locations (preliminary figures). The products manufactured by the group include air filter systems, intake systems, liquid filter systems, plastic components, filter media, cabin air filters, industrial filters and membrane filters.

Further information about MANN+HUMMEL is available at http://www.mann-hummel.com