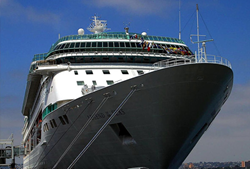 Nexus Consulting Group of Alexandria, LLC, a leading provider of private maritime safety and security solutions, is proud to announce a recent appearance on CNN during Erin Burnett’s “Out Front” program regarding the recent sinking of the MV Sewol in South Korea. Captain Bill Doherty, Nexus’ Director of Maritime Affairs, was clear in his opinion that there were many human judgment errors that led to disaster and loss of life.

Doherty cites one example for Burnett in a lack of crew training: “The ship had 47 inflatable life rafts. There were only two life rafts deployed,” Doherty confirmed to Burnett on Out Front. “The number is important because it tells you they weren’t very large and could have been deployed by one or two crew members. The crew and their Master failed to carry out their emergency procedures.”

More exchange between Burnett and Captain Doherty on CNN can be found here.

As a result of the disaster and his news appearance, Captain Doherty is preparing a more formal review for distribution in the coming days. While the report is not yet complete, Captain Doherty has stated that the tragic loss of life was culmination of a “fatal chain of errors” which may have started months before the Sewol left port April 16, 2014.

“In my opinion, it appears that the sinking of the MV Sewol and the tragic loss of lives was a preventable, final link in a systemic fatal chain of errors, possibly dating back months, when the Sewol was retrofitted with additional passenger facilities on the upper decks, raising the ship’s center of gravity,” Captain Doherty explains. “With a recent report that the Sewol had a 36-second power loss just prior to tipping, one has to ask the fitness of this ship to be sailing,” Doherty said.

Captain Doherty cites several events he’ll reveal in his upcoming report that contributed to the Sewol’s sinking, including the addition of weight to the upper levels of the ship, thereby raising the ship’s tipping point. Additionally, he cites a possible overloading of cargo, unsecured cargo, an under-trained Third Mate at the helm and more.

“The ship owner spent a mere $521 on crew training in 2013, according to audits,” Doherty mentioned. “This led to a Costa Concordia-like event where we see the Captain leave the ship first during a disaster and only two life rafts being launched. This was a systemic chain of errors that could have been prevented, not an isolated event."

“My heart goes out to the families of those who lost their lives in this tragic, preventable event,” Captain Doherty closed with.

Captain Doherty’s appearance on CNN is archived here, and the upcoming safety report will be placed on the Nexus site.

For more information about Nexus regarding maritime safety or to reach Captain Doherty for comment, please contact info(at)ncga(dot)us.

About Captain Bill Doherty
Captain Bill Doherty is a 1967 graduate of the Massachusetts Maritime Academy, a licensed US Coast Guard Master-Unlimited tonnage, and qualified First Class Pilot, Prince William Sound, Valdez, Alaska. Captain Doherty has served on numerous U.S. Navy warships and was the Head of Maritime Affairs for the Chief of Naval Operations during Operation Desert Storm. Over the course of his career, he has commanded tankers, container ships, research vessels, high-speed ferries, and was an instructor at his alma mater. Before retirement, his latest position was as Safety Manager for Norwegian Cruise Lines. Captain Doherty now serves as the director of maritime affairs for Nexus Consulting, and has appeared as a cruise safety expert before the United States Senate.