Markforged Announces Tremendous Growth in First Half of 2016 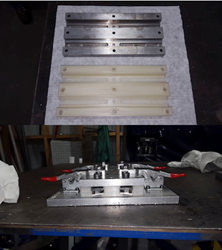 “This is only the beginning for us.” says Founder and CEO Greg Mark.

Markforged, the company that introduced the first and only 3D printer to produce aluminum-strength, lightweight, and resilient parts using continuous carbon fiber, announces robust growth and a large distributor expansion in 2016.

Measurable and significant time and cost savings are drawing increasing numbers of buyers to adopt this emerging capability in 3D printing into their processes.

Mateusz Loska, a Professional Maintenance Specialist from Unilever, says, “We make the 3D model in our CAD program, we send it to a 3rd party company...it's about one week until we get back a good part.” He explains, “When we want to develop this part ourselves, it takes 24 hours. Normally it'd be about $50 if we want to send it to another company to make it for us. The same part costs about $10 on the 3D printer.”

“Professionals and large enterprises are seeing the value of what we can provide them - something much beyond just another prototyping 3D printer at a price well below metal 3D printing with comparable strength,” says Founder and CEO Greg Mark. “The real benefit comes from shortening development cycles and saving time, cost, and materials to create end-use, reinforced strong parts.”

For the first half of 2016, Markforged sales grew 147% year over year. As of September, the innovative Mark Two 3D printers are in use in over 50 countries, and the network of Value Added Resellers grew by 60% from the end of 2015 to over 85 worldwide, with the company planning to add more by the end of the year.

With the launch earlier in 2016 of Markforged’s Mark Two printer and its new stiff carbon-filled nylon material, Onyx, the fleet of printers in use expanded into the thousands. Users of the printer range from custom motorcycle racing companies in South Africa to machine shops in the United States, from worldwide research laboratories to multibillion dollar industrial powerhouses in Germany.

What makes Markforged’s 3D printer unique is its patented continuous fiber filament (CFF) technology and Markforged's Eiger software which automatically creates a fiber pattern for maximum strength within the 3D print file. This capability makes it possible to create tooling, fixtures, and custom parts with design complexities that would be extremely difficult if not impossible to machine.

“We’re looking at basically rethinking how we can do drill jigs,” said Joseph Walters, New Product Design Engineer for Arow Global, a windows manufacturer in Wisconsin. “Now we can do more complicated machining designs that we simply couldn’t do in the past because you physically can’t machine those designs…. with Markforged, we don’t have to worry about the limitations of CNC milling.”

In addition, companies are seeing ROI at a magnitude that wasn’t possible before Markforged.

“The Markforged 3D printer has pretty much paid for itself,” said Jon Fetzer, Process Engineer at Whitford Corporation, makers of the world's largest, most complete line of fluoropolymer coatings, headquartered in Pennsylvania. “…The amount of iterations we made with one project, I don’t even know how much that would have cost. We definitely saved a lot of money.”

“This is only the beginning for us,” says Greg Mark. “Our innovation isn’t slowing down. There are new products in development that will be on the market later this year, and we will continue to build out our ever expanding global reach.”

About Markforged
As one of the most well respected and innovative 3D printing companies in the market today, Markforged’s mission is to bring high strength 3D printing to every production shop and desktop. Offering the world’s only 3D printing systems capable of automatically reinforcing engineering plastics to aluminum levels of performance and beyond, Markforged enables every business to easily manufacture parts with structural strength right on the desktop. The Mark Two Industrial Strength 3D Printer empowers professional users to affordably create workhorse 3D parts that solve real problems, as well as realize reinforced structures never before possible.  Markforged technologies are delivered with thoughtful, powerful software designed for collaboration, sharing, and scaling. For more information, visit http://www.Markforged.com.