First the Corporate and Association Meetings and Conventions, Now the Public Concerts Call for Linwood Peel's Tribute to The Drifters with their Motown Revue

Mark Sonder Productions presents The "On Broadway" 2014 Tour as they take on more East Coast public concerts for Spring. 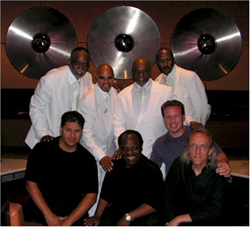 Linwood Peel's Tribute to The Drifters LIVE at The MGM Casino

Mark Sonder, MM, CSEP and the Chief Entertainment Officer at the award winning music and entertainment agency Mark Sonder Productions, Inc. is proud to announce that the 2014 On Broadway Tour of Linwood Peel's Stars from The Drifters, as well as their Motown Revue, has added more public concerts along the east coast.

Linwood Peel's Tribute to The Drifters are the national recognized leaders of this genre of music whose format is being rekindled yet again in a show performing in Las Vegas and in Europe.

From, "Under The Boardwalk," to "Stand By Me," and "This Magic Moment," plus "Up on the Roof," and of course, "On Broadway," these are the tunes everyone knows and still loves, in addition to Linwood's tribute to Motown which include some of the Top 40 Hits from The Temptations and The Four Tops.

About Mark Sonder Productions, Inc.
Created in 1985 to fill a growing need for music, entertainment, speakers, headline entertainers and supportive production in corporate and association meetings, conventions and special events plus facilities, casinos and concerts, the company 29 years later has worked in the US, Canada, Mexico, South America and Europe.
Contact: +1-540-636-1640 or msonder(at)marksonderproductions(dot)com