GMV grew 2000% in the Fourth Quarter and 1398% for the Full Year while decreasing new customer acquisition costs to $29. MassGenie continues to change the way consumers shop online in the US, similar to what Pinduoduo did in China. 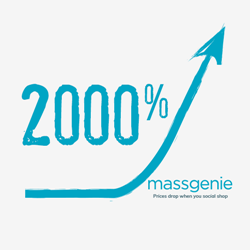 SV Frontier is MassGenie's first institutional investor. This investment builds on an exceptional year for MassGenie, which experienced exponential growth in 2018.

MassGenie also announced that they have received an investment from SV Frontier, their first institutional investor. This investment builds on an exceptional year for MassGenie, which experienced exponential growth in 2018. The latest funding will be used to fuel MassGenie’s continued growth in new customer acquisition and expansion of MassGenie’s ecosystem. MassGenie has recently opened up their Series A round which is expected to close in Q2 2019.

“It has been exciting to see the acceleration in growth that we have been experiencing since we launched in 2018 with the redesigned Power Deal,” said Dan DeVries, COO of MassGenie. “Our 2000% Q4 2018 same quarter growth was a significant increase from our same quarter growth of 424% in Q3 2018."

About MassGenie
MassGenie is a unique online social shopping marketplace site, which combines the power of crowdsourcing and e-commerce. Coding started on MassGenie in 2015 and the site soft launched in 2017. Follow MassGenie on Facebook, Instagram, Twitter and LinkedIn. MassGenie was founded and is led by veterans in the ecommerce and software industries. To learn more about MassGenie, visit https://www.massgenie.com/.