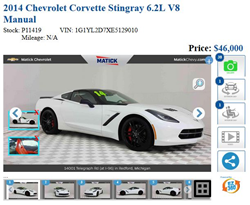 EZ36 has changed the way we capture pictures, merchandise and publish our inventory. EZ360's one-stop approach provides for simple and bulletproof operation.

George Matick Chevrolet, a top US Chevrolet dealer, uses EZ360 to manage car and truck listings The EZ360 system and automated photo studio enable the dealer to capture pictures, exterior spin, interior 360 panoramic view, and full motion video of the vehicles in just a few minutes and publish them to the dealer's web site instantly. EZ360 has proven to increase engagement by 80% on desktop and up to 300% on mobile devices. EZ360's end-to-end solution results in an operational cost that is less that half of the traditional method.

"George Matick Chevrolet is a top 10 Chevrolet Dealership in the US." said Ryan Esler, the Sales and Marketing Director at George Matick Chevrolet. "EZ360 has changed the way we capture pictures, merchandise and publish our inventory. EZ360's one-stop approach provides for simple and bulletproof operation. Our staff mastered the system quickly and the cost saving is substantial. Most importantly, since we implemented the EZ360 system our web site performance improved substantially. We are providing a much better experience for the end user."

EZ360 founder and CEO Israel (Izzy) Alpert said "We've been working with top dealers like Matick Chevrolet and developing the video and technology for over 15 years now. The only solution for the complex and error-prone process of photography is to eliminate the data feed altogether and post the media directly to the web site. We eliminated the 2-3 day delay in publishing photos to the web. We save our clients over $30,000 a year by automating the process, delivering fast ROI, and greatly increasing engagement, leads and sales".

Pictures, rich media, and video are proven to capture and convert web buyers.

EZ360's Photo Studio delivers top quality and consistent pictures. Dealers can drive a vehicle in to the studio and have photos on their web site in under 10 minutes. EZ360 features the top industry technology from automation to instant publishing to gorgeous VDPs. The software enables dealerships to capture pictures, including interior 360 and exterior spin, and post them automatically and instantly to dealer and third party web sites. EZ360 is packed with features like Hotspots, Animation, Video, Vehicle merchandising, Storyboards, and Content copy.

The dealership and its team of nearly 200 people have won multiple awards.

> Ranking in the top 1% of all Chevrolet dealerships in the United States in sales volume
> Being voted Best Dealership in Detroit by Hour Detroit Magazine for 4 years straight (2015-18)
> Earning Chevrolet’s exclusive Dealer of the Year Award for 4 years straight (2014-17)
> Being voted one of the Best Dealerships to Work For in the United States by Automotive News for 3 years, the most of any dealership in Michigan
> Having over 1,800 customer reviews on Google and Cars.com that rank us with more than 4.3 out of 5 stars