Paul Clements entertains and inspires readers through his character, the supernatural Flakman. 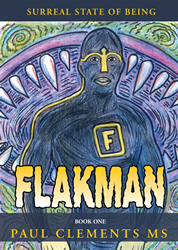 The reader will be inspired by Flakman's ability to solve scientific problems about things they they knew about, but have forgotten.

Flakman, born bionic through natural childbirth, becomes the savior of the universe while serving as a street cop in New Orleans, Louisiana. His supernatural attributes exceed all others. The novel inspires the reader to sense realism in fictional text written as a documentary. The book follows Flakman's life from childhood through his development of instincts to add to his supernatural powers. It is a book for all ages.

“The reader will be inspired by Flakman's ability to solve scientific problems about things they they knew about, but have forgotten,” said Clements.

Paul Clements has written thousands of geological reports that led to the discovery of numerous oil and gas wells. It is all in knowing how to write. convincingly. Clements has also written Flakman II, The Northern Lights Connection, Touched by the Ark, Mekong Maiden of Death, Terrorism in the Heartland, and his autobiography: In the Steps of a Poor Kid.