Get an insider's view of the worldview, aspirations and lifestyles of today's typical inner city youth; they are long-time trendsetters, even as many are also subject to the highest health and social disparities in America. The report provides both public- and private-sector organizations with the information they need to fully understand today’s youth culture and to maximize their efforts to reach and influence this critically important group. 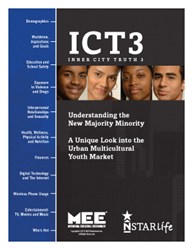 Understanding America's emerging majority--youth of color--is key to our nation thriving as a global leader. We hope to spawn a national exchange of ideas and solutions.

A national survey of more than 1,700 African American and Hispanic teens and young adults finds that the lives of today’s millennials of color are more complex than many assume. A focus of the survey was identifying (and finding solutions to) health, educational and related social disparities that raise challenges for urban youth of color achieving their innate potential. The Inner City Truth 3 (ICT3) survey was administered in-person over a five-month period in mid-2013. It delves into health, education and the worldview and aspirations of young people (ages 16-20) in five American metro areas: Atlanta, Philadelphia, Chicago, Los Angeles/Long Beach and Oakland/Richmond (CA).

ICT3 is the latest in a series of incisive research projects created by MEE (Motivational Educational Entertainment) Productions Inc., a communications firm that reaches and influences hard-to-reach audiences. ICT was also administered in 2002 and 2008, providing a long-term view of how the interests and needs of urban youth have evolved over more than a decade.

“If we really want to be effective in changing the life outcomes of today’s youth of color, we have to understand their dreams, worldview, motivations and culture,” said MEE President Ivan Juzang. We need to know why they do they things they do and what struggles they face day-to-day, so that we can reach them in a way that shows we have paid attention to and acknowledged their realities.” Juzang says that these youth remain America’s youngest trendsetters, not just in music and fashion, but also in media consumption and social behaviors that often eventually end up in the mainstream.

Along with these findings, ICT3 provides insights into the range of elements that impact and influence today’s youth:

Survey sponsors included The California Endowment, The Advancement Project, The United Negro College Fund and The National Campaign to Prevent Teen and Unplanned Pregnancy (NCPTUP). “Once again, MEE gives us insights into a group of young people whose views are critical, but are either misunderstood or absent from larger national conversations about the issues that affect their lives,” said Marisa Nightingale, Senior Media Advisor at NCPTUP. “The ICT3 survey findings make it clear that urban youth of color have goals and aspirations that are quite similar to those held by youth from other backgrounds. This clear look into the lives of urban youth of color will inform and inspire those who are working to improve the lives of all young people for years to come.”

The project included an expert advisory panel made up of a dozen esteemed thinkers and doers across various fields and industries. The panel helped fine-tune the ICT3 research design, survey questions/content, data analysis and will support research dissemination in communities across the country.

Visit us on Facebook for more information about ICT3 and other MEE projects.