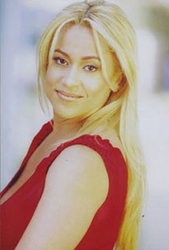 'I would like to thank Burbank International Film Festival Director Jeff Rector for understanding the importance of providing a spotlight for women filmmakers,' says director Mercedes Mercado.

"Although I know my work as a filmmaker stands on its own, I am proud to represent both women and Latina directors at this year's Burbank International Film Festival, here in the capital of moviemaking,” says director Mercedes Mercado.

"The plot for supernatural drama 'Hidden Sins' reflects that not everything that happens in life can be explained. Many of my life experiences, including cheating death, the audience would find hard to believe. I can tell these dark stories on screen without anyone knowing how real and personal they are to my life." You can follow “Hidden Sins” on Facebook at http://www.facebook.com/HiddenSinsTheFilm.

Despite women directors and female driven stories performing well at the box office, the Director’s Guild of America reports that only 7% of directors in the top 250 grossing movies of 2014 were women, with just 3% of episodic television directed by women of color.

“I would like to thank Burbank International Film Festival Director Jeff Rector for understanding the importance of providing a spotlight for women filmmakers,” says director Mercedes Mercado.

“We should see unique stories that reflect the rainbow tapestry of one of the most diverse societies in the world,” says director Mercedes Mercado. “It is what's most interesting for audiences and advances us as a society to see life through eyes with a different perspective than our own lens.”

“I hope to see you at the Friday, September 11th, 7 p.m. premiere for 'Hidden Sins' at the AMC Town Center in Burbank. Please join the filmmakers, cast and crew for an after party for Chat Noir Ink’s 'Hidden Sins,'" says writer/director Mercedes Mercado. Media wishing to cover the event, please contact us below.

Avid sports fan, art buff, gourmet cook, and travel enthusiast, Mercedes Mercado has toured over one hundred fifty cities worldwide. Her creative adventures began with winning her first writing contest in college and performing on stage as the lead in a play she was talked into auditioning for.

An avid reader and honor society member who represented her school in the spelling bee, a young Mercedes tried to keep her 'nerdist' tendencies under wraps. Despite her best efforts at keeping her talents a secret, she entered college at age sixteen with a fascination for astronomy and the stars, perhaps a foreshadowing for her foray into Hollywood.

A tragic turn affects her choices to this day. A home fire took her fiancé, and her family was called to say their goodbyes to her as she lay unconscious for three days. Cheating death after flatlining, she is grateful for her second chance. "I truly feel like the Phoenix who's literally risen from the fire. I feel I've had a rebirth as a more conscious and conscientious person. I'm grateful for this ultimate gift, and want to use it to make a difference," says filmmaker Mercado.

Mercedes has graced the screen as an actress with the late Brittany Murphy in "Little Black Book," with turns in John Singleton's "Shaft" and "Illegal Tender." Encouraged by an industry mentor to try her hand at screenwriting, Mercado has been creating content under her Chat Noir Ink Entertainment.

Mercado has written, directed and produced the award nominated "Angel of Death," and "Hidden Sins" to date with more coming soon. Mercado's work has screened at Cannes Film Festival's Court Metrage overseas, and is now entering the U.S. film festival circuit. Mercedes spends her time between Los Angeles and her native New York.

You can leave the past behind, but you cannot escape it. This is the lesson a married couple must learn as the past comes back to haunt them both. But if the victims are dead, how can they make the perpetrators pay? In this supernatural tale, revenge is guaranteed.

"Hidden Sins" was cast by Jacob Johansson and edited by Andrew Harwood with Paul Losada as sound mixer and Sergio Crego as key grip. Hair and makeup was provided by Sandra Saad with costume design by Vivien Goa.

About the Burbank Film Festival

The Burbank International Film Festival is headed by president and artistic director, award-winning filmmaker and actor Jeff Rector. Jeff Rector's latest feature film, “Revamped,” which he wrote, directed and produced, is distributed worldwide and available on Google Play, Netflix, Blockbuster and VOD. Revamped, a feature length version of his short film, “Fatal Kiss,” won awards for Best Screenplay, Best Director, Best Picture and was one of the first short films ever acquired by HBO. Get tickets to see the award nominated "Hidden Sins" at http://www.burbankfilmfest.org/