Elkhart Lake, Wisconsin jewelry designer Kim Jakum, owner of Metalmorphis Jewelry (http://www.metalmorphisjewelry.com), is pleased to announce she is donating a percentage of proceeds from the sales of her handcrafted "One World One People" Boho Wrap Bracelet to human services charity One World Foundation. 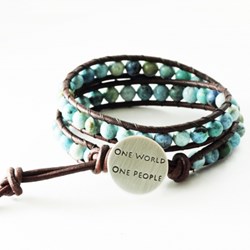 One World One People Bracelet by Metalmorphis Jewelry

One World's support of children's education and welfare are so worthy; I'm happy to be able to help.

Elkhart Lake, Wisconsin jewelry designer Kim Jakum, designer/owner, Metalmorphis Jewelry (http://www.metalmorphisjewelry.com), believes strongly in One World Foundation’s goals as defined by their mission statement, which reads, "One World Foundation strives to cultivate human unity by fostering harmony among people of all classes, ethnicities and religions and by empowering children to become active citizens of the world."

As a result, she was inspired to create her handcrafted "One World One People" Boho Wrap Bracelet, which features African blue opal beads and a custom designed, fine silver "one world, one people" medallion closure, featuring the foundation's tagline.

Jakum originally designed the "One World, One People" bracelet for inclusion in a gift bag prepared by The Artisan Group, a California-based, handcrafted artist promotions organization, to be auctioned off by One World Foundation in support of their Baan Unrak Weaving Project, which provides assistance to the Baan Unrak Children’s Home in Sangkhlaburi, Thailand.

As Kim began to learn more about One World Foundation and the Baan Unrak Weaving Project, she was inspired to reach out to Stephanie Drapeau, the Foundation’s Vice President, to learn what more she could do to support the project.

"After talking with Stephanie, we agreed that I would make the bracelet available for sale on my website and then donate to the Project 22% of the proceeds from each sale, which equates to $24.00 per bracelet," said Kim. "One World’s support of children’s education and welfare are so worthy; I’m happy to be able to help."

When asked how she came up with the "One World, One People" bracelet design, Kim noted that the charity’s focus on creating world peace and harmony among all peoples of the world inspired her to fashion a bracelet that would evoke a feeling of connection with the earth and its people.

"I wanted to create a bracelet with Boho flair that would have a rustic quality and celebrate the beauty of this earth we all share. I came upon the African Blue Opal beads and knew they would be perfect. No two beads are the same and the patterns and textures on each remind of little earths. They were ideal for this project. The custom-designed medallion closure keeps the One World Foundation message front and center."

"We are very excited to have Kim’s support with her beautiful bracelet," said Stephanie Drapeau. "It’s the individual actions of people like Kim that make a significant difference for the children at Baan Unrak. We are truly grateful."

Those interested in supporting the One World Foundation and its initiatives by purchasing a bracelet can do so by visiting either metalmorphisjewelry.com or metalmorphis.etsy.com.

ABOUT METALMORPHIS JEWELRY
Metalmorphis (http://www.metalmorphisjewelry.com) was founded in 2010 by jewelry designer Kim Jakum of Elkhart Lake, Wisconsin. Jakum creates handcrafted, keepsake jewelry that she customizes and personalizes for the wearer. Kim has been designing and creating jewelry for over 20 years and is PMC certified. Her work has received numerous awards and has been featured in magazines like "Metal Clay Artist" and "Art Jewelry Magazine."

ABOUT ONE WORLD FOUNDATION
The One World Foundation (http://www.oneworld-foundation.org) was founded by Christian Drapeau and his wife, actress Stephanie Drapeau, in 2007. Christian, a research scientist with a background in stem cell research, and his Stephanie, who is a successful actress with over 20 films to her credit, founded One World Foundation, whose mission is "to foster harmony among people of all classes…and empower children to become active citizens of the world."