Muse Harbor Publishing launches the book tour for "Everything Ever After: Confessions of a Family Man", based on Michael Picarella’s Southern CA-based syndicated family columns at the Conejo Valley Botanic Garden's Kids' Adventure Garden, at 400 West Gainsborough in Thousand Oaks, CA on 6/14 from 3- 6 p.m. and on July 8, 2014 at Mrs. Figs' Bookworm at 93 East Daily Drive in Camarillo from 5-7 p.m. 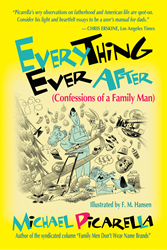 Everything Ever After: Confessions of a Family Man

'Picarella’s wry observations on fatherhood and American life are spot-on. Consider his light and heartfelt essays to be a user’s manual for dads.' - Chris Erskine, Los Angeles Times

On Saturday, June 14, 2014, Muse Harbor Publishing will host a family fun event to launch their new illustrated humor book, "Everything Ever After: Confessions of a Family Man" by popular columnist Michael Picarella, at Conejo Valley Botanic Garden's Kids' Adventure Garden at 400 West Gainsborough Road, Thousand Oaks, CA, from 3-6 p.m. This is a special Saturday public opening of the Kids' Adventure Garden, which is normally only open on Sundays.

Picarella offers witty and often laugh-aloud funny stories about marriage, fatherhood, family and suburban community life in his book. Recently coined a "User Manual for Dads" it is being promoted by Muse Harbor as "a great Father's Day gift."

Picarella will entertain attendees with hilarious and poignant fatherhood excerpts from his book at 4:00 p.m. The author will sign copies as his publisher provides food and refreshments to the public from 3-6 p.m.

The next stop on the author's book tour is on Tuesday, July 8, 2014, where Picarella will be appearing at another fun book signing event at Mrs. Figs' Bookworm at 93 East Daily Drive in Camarillo from 5-7 p.m. Visit mrsfigs.com.

Author Picarella (aka Suburb Man) is an award-winning writer and National Society of Newspaper Columnists member. Since 2006, he has written his column “Family Men Don’t Wear Name Brands,” for The Acorn Newspapers in Los Angeles and Ventura Counties. His other column, "Picarella Family Report" for The Signal Newspaper for over two years.

Picarella’s refreshingly clean humor stands out from other humorists in an age where families are often depicted as wisecracking and argumentative. Writer/Director Gregory Poppin (ESPY Show Awards, My Crazy Life) says, “Michael’s sharp wit collides with the stark reality of trying to be a Cosby husband and father in a ‘Pulp Fiction’ world. I read about his misadventures with pity, until I realized, oh… that’s my life, too.”

"Everything Ever After" is also available online on museharbor.com on June 10, 2014. Muse Harbor is offering a 15% discount on both print and e-book copies when purchased at MuseHarbor.com using this coupon code: ACORN. The book is also available on Amazon, BarnesAndNoble.com and iTunes.

“Everything Ever After” is illustrated with clever cartoons by famed illustrator F.M. Hansen, whose cartoons have been published in numerous anthologies worldwide.

Picarella can be reached for further Radio, TV, Print and Online interviews by contacting Margaux (at) museharbor (dot) com. Friend Michael Picarella on Facebook for his latest humor and news.

Muse Harbor Publishing was founded in Camarillo in 2011 as an organization of “writers helping writers, in service to our readers.”