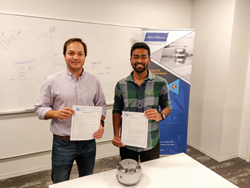 "Certification to higher pressures will expand our market,” said Omar Kulbrandstad, CEO of MicroSilicon. “Continuous real-time chemical data is already changing the paradigm for flow assurance, but some customers have been requesting higher pressures to look at live oils"

The Quantum RF* Asphaltene Monitoring system from MicroSilicon Inc has received certification for a series of pressure and temperature cycling tests performed by a global leader in consulting engineering and certified testing services. In particular, the Quantum RF system completed a series of tests of its paramagnetic sensor with fluids at 5ksi at 25C and 3.5ksi at 120C. No other commercial paramagnetic device has been certified for such high-pressure flowing fluids. It is known that crude oil properties change significantly below its asphaltene onset pressure so the higher-pressure rating will allow the device to take measurements closer to that onset pressure.

The Quantum RF sensor takes digital snapshots of the paramagnetic behaviour of molecules as they are conveyed by crude oil flowing through the wellhead or oilfield tubular. It then transmits the chemical data to the cloud where it can be used to optimize treatment for flow assurance problems such as asphaltene, corrosion and scale. Since its launch in 2017, the Quantum RF Asphaltene Monitoring System has completed multiple paid field tests in Canada, USA and Abu Dhabi and operators are already addressing the costs of asphaltene management based on the field data. Previous to this certification, the device had been limited to applications where the fluid pressure was less than 500psi.

“Certification to higher pressures will expand our market,” said Omar Kulbrandstad, CEO of MicroSilicon. “Continuous real-time chemical data is already changing the paradigm for flow assurance, but some customers have been requesting higher pressures to allow measurement of live oils that still contain entrained gas. This milestone takes us closer to being able to provide a real-time chemistry platform on the seabed. In the shorter term, it will make possible operations on offshore platforms in Gulf-of-Mexico where formal pressure certification is a requirement for hardware installation.”

In Q4 2018, MicroSilicon won the Best-in-Show Award at an SPE industry competition to highlight innovative and emerging energy technology companies, and the Quantum RF Asphaltene System was also nominated for World Oil Best Digital Transformation Technology. The system had previously been highlighted for special mention by Abu Dhabi National Oil Company at their RDPETRO conference in May 2018.

About MicroSilicon
MicroSilicon Inc is the world’s innovation leader for real-time fluid characterization using electromagnetic and quantum chemical technology. They are now developing a range of flow assurance products and services including corrosion, scale and asphaltene sensing. MicroSilicon is based in Houston, TX. http://www.microsiliconinc.com/