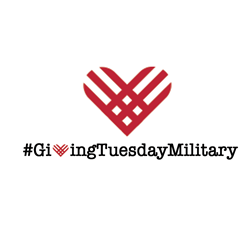 One act of kindness can change the world. It is with this in mind that three military spouses from different branches of service made the decision to go global and inspire 1 million acts of kindness within the military community and beyond by establishing the inaugural GivingTuesday Military edition. GivingTuesday, which is the Tuesday directly following Thanksgiving, was established in 2012 with one goal in mind, to make generosity go viral. This global day of giving is designed to inspire charitable giving to organizations that are changemakers in their communities, but also stimulate collaboration in communities.

Beyond monetary donations, it was this sense of community and generosity in mind that led 2019 Armed Forces Insurance Military Spouse of the Year Branch winners Jessica Manfre (Coast Guard), Maria Reed (Army) and Samantha Gomolka (National Guard) to launch the inaugural GivingTuesday Military edition which will occur on Tuesday, December 3, 2019.

The challenge to military service members, families (including gold star), and veterans is to complete 1 million acts of kindness and share a photo, video or post of their act through social media channels with #GivingTuesdayMilitary. Manfre, Gomolka and Reed are currently engaging ‘Chapter Ambassadors’ for this viral campaign at the more than 800 military bases worldwide and currently have 2000+ members after the first week.

“These acts of kindness can be small, but give members of the military community an opportunity to connect with each other and the communities they live in with a meaningful gesture,” says Manfre. “The opportunities are limitless and could be as simple as buying a cup of coffee for a stranger, volunteering at a food pantry or animal shelter or simply sharing a hug with someone who needs it.

Chapter Ambassadors are being challenged to spearhead local efforts to garner acts of kindness both within the military community and civilian sector.

“Our military, veterans and their families are a strong and cohesive group and we hope this day of generosity will show the world what we are, beyond the uniform,” says Gomolka.

Social media pages have been set up on Facebook, Instagram and Twitter for the December 3 viral campaign, all with the handle @GivingTuesdayMilitary. For more information or to join the movement, please visit givingtuesdaymilitary.com

“We were brought together by the Armed Forces Insurance Military Spouse of the Year program for the work we do individually, but soon realized that as a team, we could really enact change in communities around the world. GivingTuesday was that perfect opportunity to amplify our collective voices,” says Reed. “One act of kindness can have a ripple effect and we hope that with one million acts, we can create a tidal wave.”