Joe McLaughlin worked on the supply chain management side of the textile manufacturing industry and after spending 7 years working in Sri Lanka, Turkey, Bulgaria and Romania, it was time for Joe to return home to East Kilbride, Scotland. The depth of experience Joe obtained while working abroad helped him realize he was ready to own his own business; after researching several opportunities he decided to franchise with Minuteman Press, where he found the right fit and is now approaching 9 years in business. 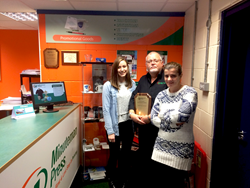 I appreciated the no nonsense 'can do' approach of Minuteman Press. Their business model combined with visiting existing Minuteman Press centers and speaking with current owners is what really sealed the deal for me.

For nearly 9 years, Joe McLaughlin and his wife Florina have owned and operated their Minuteman Press design, marketing and printing franchise in East Kilbride, Scotland. After spending 7 years working abroad on the supply chain management side of the textile manufacturing industry, it was time for Joe to return home. Joe knew that he wanted to start his own business, and it was just a matter of finding the right opportunity. Here is how he found it with Minuteman Press, and why it was the perfect fit for Joe and his family.

From Textiles to Printing – The Fabric of Joe McLaughlin's Professional Life

Joe McLaughlin's career was built on supply chain management and quality control. During his 7 years abroad, Joe would travel to Sri Lanka, Turkey, Bulgaria, and Romania. Joe was tasked with supplying the Marks and Spencer and Next clothing stores, making sure that all of the materials that make the clothes were properly utilized. This required a high attention to detail and design, as well as proper organization and material planning.

"I enjoyed my time in the textiles industry," says Joe. He adds, "But it was time to return home."

Tired of traveling, Joe decided to start researching business opportunities back home in Scotland. When his son attended a franchise expo in Glasgow, Minuteman Press was one of several franchises that Joe decided to research. The similarities between textile manufacturing and design / printing is what drew Joe to Minuteman Press, particularly the common threads of creativity and material planning. What kept his attention was Minuteman Press' detailed and organized approach to business.

Joe explains, "My business experience abroad had much more responsibility than any job I had previously had in the United Kingdom. This depth of experience helped me make the jump to running my own business. When I met with Minuteman Press International Vice President George Holzmacher, I appreciated the no nonsense 'can do' approach of Minuteman Press. Their business model combined with visiting existing Minuteman Press centers and speaking with current owners is what really sealed the deal for me."

Returning Home and Growing the Business

Joe McLaughlin first opened the doors to his Minuteman Press franchise in the Kelvin Industrial Estate of East Kilbride, Scotland in the summer of 2007. Year over year, Joe has continually grown his business. In January 2015, he won his first Top Overall Performance award from Minuteman Press International for the United Kingdom North region. Joe's Minuteman Press franchise was then a repeat winner of the same award in January 2016, an accomplishment that he was delighted to earn for two consecutive years.

"The awards are a measure and confirmation of our success and a reminder of how much progress we have made during these years," reflects Joe. He adds, "The proprietary management software that Minuteman Press International provides to owners makes my ability to manage my business so much easier than if I didn't have it. Together with the contacts and support of the Minuteman Press franchise system as a whole, it makes us stronger and better than competitors of a similar size and structure. We are able to offer a huge variety of products and services, making us THE one-stop solution for our customers."

"Joe McLaughlin saw the benefits of franchising with us 9 years ago and he has been an exemplary business owner in East Kilbride who cares about his customers and his community," notes David Watson, Minuteman Press International Area Manager for the UK North Region. He continues, "We are proud to have helped him transition to entrepreneurship thanks to the training and support we provide, and even prouder of how hard he's worked to build his business."

Joe very much attributes much of his success to his wife Florina and his graphic designer Samantha. They all work together fantastically as a team and this is reflected in their ongoing success. More than just print, their Minuteman Press franchise is also heavily involved in marketing and branding as they provide mailing solutions and promotional products to their clients. Joe is looking to continue the trend of growth and has set his sights on a third consecutive Top Overall Performance award in 2017.

After traveling the world and then finding his place as an entrepreneur back home, Joe McLaughlin enjoys giving back to the community both in Scotland and abroad. Minuteman Press in East Kilbride is proud to sponsor a local football team, EKFC East Kilbride. Fond of his years in Sri Lanka, Joe also supports a Sri Lanka school for handicapped children, MENCAFEP, that was founded by his friend Christopher Stubbs.

Joe says, "I first became friends with Christopher Stubbs in 1999 when I was working in Sri Lanka. MENCAFEP started with just six pupils and now they work with over 3,000 children and their families. Christopher has been awarded an M.B.E. (Member of the Order of the British Empire), which is awarded for a significant achievement or outstanding service to the community. Prince Charles personally gave him the award during a visit to Sri Lanka in 2009, and Prince Charles also supports the project financially."

Joe continues, "We returned to Sri Lanka for a holiday in 2014 and met up again with Christopher and his wife Ranji. We took loads of paper from Minuteman Press for the kids to draw on! We also now pay the salary of one of the teachers, something we really wanted to do to help support the school. Anyone interested finding out more or donating should visit their website: http://www.mencafep.com".

Every journey to entrepreneurship is unique, and Joe McLaughlin's story is no exception. There is a common thread, however, for those who make the leap from professional careers to business ownership: The desire to be a part of something that is completely their own and yet is also bigger than themselves.

Joe McLaughlin knew he was ready to leave the textiles industry behind, strike out on his own and go into business for himself. He also knew that he couldn't do it alone, and the ongoing support provided by Minuteman Press afforded him the best of both worlds. Joe states, "They helped me return home to East Kilbride and do things my way, and without them, I couldn't have done it at all."