Mits Arayama has always been fascinated with the visual side of marketing, which is why he was able to successfully introduce instant Ramen to the U.S. through brands like Top Ramen and Cup Noodles. After a long and storied 30-year career with Nissin Foods where he worked his way from marketing director to CEO, Mits is now celebrating ten years as the proud owner of his Minuteman Press design, marketing and printing franchise in Dana Point, California. 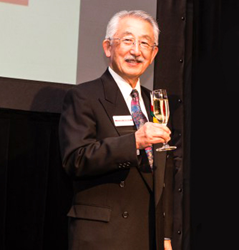 I've always been a fan of visual marketing and printing. I knew Minuteman Press was fantastic because of my own past experiences with them. Their reputation and support provided by them is outstanding.

Celebrating ten years as an entrepreneur and business owner, Mits Arayama runs his Minuteman Press design, marketing and printing franchise in Dana Point, CA with the same energy, excitement and vision that has always served him well. For 30 years, Mits worked for Nissin Foods, a Japanese food manufacturer, where he held top-level positions of Marketing Director and CEO. During his time at Nissin, Mits was responsible for bringing the Cup Noodles and Top Ramen brands to the U.S. from Japan, a massively successful marketing venture that changed the way college students consumed dorm room meals forever.

Mits Arayama reflects on his crowning achievement during his time with Nissin Foods: "I brought instant Ramen from Japan to the U.S. from concept to market in the 1970s. I never thought it would be as big as it was. It was very challenging, and we tested everything from taste to concept, from product to brand. We went up against Campbell's and we were told we couldn't compete. We took the position of soup, and we targeted and 18-29 year-old demographic, especially college kids. We started with supermarkets on the west coast, and little by little we grew to what the brand became."

After retiring from Nissin and leaving the corporate world behind, Mits Arayama could now focus on fulfilling his lifelong dream of owning his own business. "I was highly micromanaged, from taste and visual to advertising and marketing," Mits recalls. In 2006, he bought an established Minuteman Press franchise for sale in Dana Point, California. This has enabled Mits to help other businesses bring their own marketing ideas to life by sharing his insights and offering them complete branding solutions.

Armed with a wealth of knowledge and backed by ongoing local support as well as the products and services he is able to provide as part of the Minuteman Press franchise system, Mits Arayama found his home as a business owner in Dana Point. He takes pride in helping his clients grow their businesses. In 2016, Mits not only hit the 10-year mark for his business but he was also elected as the Chairman of the Dana Point Chamber of Commerce. Over the past decade, he has also won several awards including business of the year and ambassador of the year.

Future of Printing and Fusion with Marketing

For Mits Arayama, there is another huge benefit of franchising with Minuteman Press. He explains, "From the day I started ten years ago, everything began to move towards digital printing. I knew that Minuteman Press International was following the industry very closely and did their homework on printing trends and innovations. I followed their direction they gave us, and we have extended our business not only into digital printing but also promotional items as well."

Mits sees the promotional products sector as a real growth market for his Dana Point business: "Dana Point is between Newport Beach and San Diego. It's a beautiful coastal town and a high income city. Promotional items are ideal because today's business professional wants them. Whether it's branded apparel or surfboards, these products are great promotional drivers for businesses and their brands."

Rewards of Entrepreneurship and Love for Dana Point

As successful as Mits Arayama was in the corporate world, he appreciates what he is able to do today as a business owner. "Being an entrepreneur lets me be more independent. I did not like reporting to corporate headquarters for every little thing. I like to control my own destiny."

Minuteman Press International also provides Mits with the support and resources to back him up. "I am in charge, but I also have all of the resources at the national and local levels thanks to Minuteman Press. We all share ideas and you get the pulse of how other centers do business, and that is very helpful. We are all part of the same franchise family and the owners who I contact are very open and supportive."

Another reward of entrepreneurship for Mits is that being a business owner allows him to be so active in the Dana Point community. He cares deeply about making a positive impact in Dana Point, and as the 2016 Chairman for the Dana Point Chamber of Commerce, the affection Mits has for this city is clear: "We have been honored as Business of the Year in the past, and it meant so much to have our business peers recognize us in that way. Through the Chamber and other organizations, I promote Dana Point quite a lot. This is a unique city that is changing. If you go from San Francisco to San Diego, you probably won't find a city like ours that has 4 or 5 hotels and resorts along with harbors as well. Dana Point is an undiscovered diamond, and everyone I know who does business here – we are all proud ambassadors."

With ten years in the printing business under his belt, Mits Arayama continues to spend his time adhering to the same principles he learned throughout his career as well as through Minuteman Press training. "I get into the office between 7:30 and 8 am to catch up on business, and I have found that we are consistently getting a lot of repeat business as well as Internet orders."
"After that, I go out and see my customers, and many of them are now my friends because of the relationships I've worked hard to build over the past decade. They now see me as Mits, and not just as Minuteman Press. The everyday work we all put in together translates into the success we are having, and I make it a point to go out and market the business and avoid getting stuck inside in production."

"Mits Arayama has accomplished so much in his career and I congratulate him for ten years in business with Minuteman Press," says Dan Byers, Minuteman Press Regional Vice President for Southern California. He adds, "Mits follows the Minuteman Press program, goes out there and markets himself and his business, and is successful as a result."

Advice and Tips for Others

Mits Arayama made it all the way to the top of the corporate ladder before franchising with Minuteman Press, and with that experience comes insightful words of wisdom for others who are thinking about transitioning to entrepreneurship: "I would imagine that many new business owners are like me and came from corporate environments. I say to them, 'You are the salesman as well as the president as well as the janitor. It's all yours. Also, you can’t do business if you don’t have customers. Joining the Chamber of Commerce and other organizations brought me a lot of business.'"

Mits adds, "I think we are a complete operation. Customers have learned we are not just printing but a team of marketing professionals. With our graphic designer and other staff, we are able to solve anything you need. I sell myself first, and make sure that clients understand we are all about providing solutions."

When asked about a specific example that comes to mind, Mits explains, "We had a local attorney come in for a quote on printing where he was changing his branding. An outside graphic designer did the logo, and it just didn't reflect the image of this client. I quantified who I am and where I was coming from. He listened, and we were able to provide him with the intended messaging he wanted at 40% of the cost. Even if he didn't want to change anything, I only felt it was right to offer my professional opinion before printing the original job."

One final piece of advice comes from the brilliant business mind of Mits Arayama. It also happens to come from the heart: "Stay within the franchise system, but be who you are. I find satisfaction with Minuteman Press."