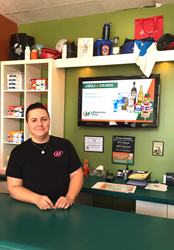 The positive growth the Philadelphia region is seeing this year is not surprising to me. We provide products and services that businesses are already using every day.

Minuteman Press International is finding the Philadelphia region to be fertile ground for franchise success in 2016. Total sales volumes have increased 19% across the region in the first quarter 2016, and already there have been five grand openings this year in Philadelphia and surrounding areas in Eastern Pennsylvania.

"The positive growth the Philadelphia region is seeing this year is not surprising to me. We provide products and services that businesses are already using every day. Our franchise owners have an advantage of being in an industry that offers products and services that do not require the need to generate interest in them. It’s obvious to me that the Minuteman Press franchisees are getting our message out to more businesses than ever before," said Richard Hornberger, Minuteman Press International Regional Vice President for the Philadelphia region.

Richard added, “Minuteman Press International provides the training, support and resources to help our franchise owners realize their visions of owning their own business, even if they have no previous business experience. These are just some of the reasons we’ve been experiencing such growth in and around Philadelphia."

Bala Cynwyd, PA – Jude Arijaje came to the United States from Nigeria in 2000, and his first job in Philadelphia was as a parking lot attendant. Jude then worked as a real estate agent before franchising with Minuteman Press in 2008, when he opened his center in the heart of Philadelphia at 1717 South Broad Street. Already a member of the Minuteman Press International President's Club for top performers, Jude became an owner of his second center in Bala Cynwyd, PA in January 2016. Jude bought the franchise for sale from longtime Minuteman Press owner Jack Pressman, who retired after 22 years in business. The center is located at 301 Montgomery Ave, Bala Cynwyd, PA 19004.

Newtown, PA – John Stranford worked in management for a large healthcare organization, on the benefits side of the insurance business. After reaching as high as he could go on the corporate ladder, John decided to fulfill his lifelong dream of owning his own business. In 2015, John bought his first Minuteman Press franchise in Morrisville, PA. Then, in January 2016, he bought his second center in Newtown, PA, which is located at 281 N Sycamore St, Newtown, PA 18940.

Glenside, PA in the Keswick Village – Charles and Lyn Church are opening their brand new Minuteman Press design, marketing and printing franchise on June 1, 2016. Charles comes from a background in sales and marketing, while Lyn works with non-profit organizations. Their new Minuteman Press center is located in Glenside, PA inside the historic Keswick Village, which serves as a cultural hub and thrives as a commerce center.

Paoli, PA – Barry and Philip Kitain are the latest father and son franchise team to get started with Minuteman Press. Barry is an attorney who once worked for a large auto repair franchise as a site selector. Barry's son Philip comes from a management background with a home improvement manufacturer. Their Minuteman Press center is set to open in Paoli, PA on June 1, 2016.

“We have not found a limit to the size that an individual Minuteman Press franchise owner can grow their business," commented Richard Hornberger. He continued, "However, if a Minuteman Press owner wishes to expand their footprint and reach a larger geographical area, then opening another center in another area is an option they can employ."

Serving the business community for over 40 years, Minuteman Press’ customer service driven business model provides digital print, design and promotional products and services to businesses from concept review through to completion. Today we are much more than just print; we can provide anything you can put a name, image or logo on! Our new slogan – We Design, Print & Promote… YOU! – indicates the wide variety of products and services we offer that go beyond printing. For more information about our products and services or to find your local Minuteman Press, visit http://www.minutemanpress.com.