Read All About It! Former Newspaper Executive Jeff Sirota Reflects on One Year as Minuteman Press Business Owner

After being laid off twice from the newspaper industry, the last thing on Jeff Sirota's mind was to buy a printing business. Now, Jeff reflects on being a Minuteman Press franchise owner for 1 year and explains how and why he is thriving on this side of the print industry. 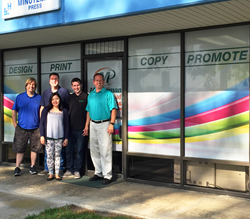 I think some of my newspaper experience transferred over very well into my experience as a Minuteman Press franchise owner.

The last thing on Jeff Sirota’s mind was to buy a digital print, design and marketing franchise, especially since he carried a hint of a misconceived notion that the printing industry is dying. To his credit, Jeff didn’t grab that idea out of thin air, but rather from a tumultuous experience as an executive in an entirely different segment of the print industry, the newspaper business.

While he gained a treasure trove of professional experience throughout his life’s journey before becoming the successful franchise owner of Minuteman Press in Carlsbad, California, he also experienced the drain of long work hours (including weekends) only to deal with the frustrations attached to the common instability of employment in any industry: Being laid off. It happened to Jeff twice as an executive for a "Top 25" major metro newspaper.

The hard work that Jeff Sirota put into his 25-year career in the newspaper industry would help him become a successful business owner. Jeff reflects, “I started my newspaper career by delivering newspapers to paperboys. Eventually, I worked my way up to Retail Sales and Operations Manager for a top 25 major metro newspaper.” The people skills he developed combined with his ability to communicate effectively at every level enabled Jeff to work his way up to a leadership position, something that would serve him well when he decided to own his own business.

Sirota finally had enough after his second corporate layoff and decided it was time to take matters into his own hands. A quarter of a century in the unsteady newspaper industry left this executive with questions about the printing industry in general. Jeff saw the inconsistency and downright instability in this particular field. He recalls, “In the newspaper industry, even though we had 400,000+ daily customers, we were churning through customers and losing them left and right for many reasons, primarily due to the Internet and instantaneous news that we couldn’t compete with. Due to revenue losses, layoffs were inevitable and I was one of them in 2013. Soon after, I decided to visit a franchise show.”

“When my family found out I was going to a franchise show, the one thing they told me was to not bring my checkbook! I was looking at all opportunities at the show but stayed in the middle of the aisle so I could keep an equal distance from all. However, Dan Byers, (Regional Vice President in Southern California for Minuteman Press International) reached out, greeted me and led me into his booth. Quite honestly, from when we first started talking, everything started to fall into place and like the old saying, 'it simply fit like a glove.' I have to admit, I was a little gun-shy about the printing industry as I was never fired from a job, but I was laid off twice from the same newspaper because it is an industry that’s dying.”

Mr. Byers reflected on the time he met Jeff: “I told Jeff that people often mistakenly transfer the negative impact that the Internet has had on newspapers and Yellow Pages to the entire print industry. I explained that we’ve never printed newspapers or Yellow Pages and that the Internet — specifically, the opportunity to advertise online and the ability to transfer digital files — has become a complete blessing for our franchise owners. We have never been able to do as much in terms of total sales with fewer employees and less space. As a result, our stores are not simply surviving in spite of the Internet; they are thriving because of it.”

After all of his questions were answered, Jeff Sirota took the time to tour numerous stores, visiting and speaking with Minuteman owners. Soon after, he and his wife Olga came to the conclusion that buying a Minuteman Press franchise was right for him. The end result is that Jeff has already brought the Carlsbad location to new heights and it is performing with excellence today, producing better results now than it has in 20 years.

“I think some of my newspaper experience transferred over very well into my experience as a Minuteman Press franchise owner,” says Jeff, who is motivated to keep the business-building momentum at a high level. He adds, “I still have that same mentality that was so necessary in the newspaper field and ask the same question each day: ‘How can I sell more product today?’ I brought that ’24/7 newspaper drive’ into the Minuteman Press franchise so I could build the business.”

Throughout his career, Jeff also perfected the art of active listening, a crucial communication skill for any business owner. With a little bit of humor and humility, Jeff says, “I am a good listener. Learning from those experienced in the business to business services industry and listening to my customers allows me to give them what they want. Personally, I don’t have good looks, but I rely on my good personality to help me work with people and appeal to them so I can earn their business for a long time.”

1 Year in Business and Day to Day Life

Reflecting on his first year in business as a Minuteman Press franchise owner, Jeff Sirota has been delightfully surprised by the versatility of the day to day life of a business to business industry professional. He says, “In the digital print, design and marketing angle of the print industry, the daily grind is more like the box of chocolates Forrest Gump references in the movie. You never know what you’re going to get and that makes every day unique, which definitely keeps things interesting and entertaining!”

As someone who experienced two layoffs in the newspaper industry, Jeff Sirota is the perfect example of someone who truly believed that “print is dying” and yet is now thriving as the proud owner of his Minuteman Press printing franchise. It’s a testament to Jeff’s hard work as well as the fact that contrary to what the newspaper sector might indicate, getting into this side of the printing business remains a viable option with tremendous growth potential.

“The resulting outcome of Jeff’s decision to become a Minuteman Press franchise owner was never in doubt”, as Dan Byers recalls. “As if inspired straight from the pages of Napoleon Hill’s Think and Grow Rich in which thoughts are described as ‘things’, Jeff Sirota’s number one reason for purchasing a Minuteman Press franchise as written on his questionnaire was, ‘I know I will be successful.’”

Dan concludes with sincerity, “I know Jeff will continue to grow his business even further and it is enormously gratifying to see his expectations realized. Congratulations, Jeff, on 1 year in business with many more to come.”