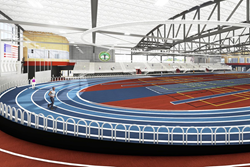 “The indoor track at Gately Park will create much-needed opportunities for the Pullman and Roseland communities to stay safe, to stay engaged and to stay on track to a brighter future.”

When Gately Indoor Track & Field opens in Chicago’s historic Pullman neighborhood, it will make some history of its own: it will be the city’s first public indoor track and field venue; and it will be the first facility in Illinois with a hydraulic banked track.

The state-of-the-art hydraulic banked track going into Gately is designed and manufactured by Mondo. The leader in sport track innovation and expertise, Mondo was the first company to produce a variable hydraulic banking track. This unique system was installed for the first time in 1987 and continues to lead the market with numerous installations at prestigious universities and track and field facilities worldwide.

Gately’s 200-meter, eight-lane oval track will feature Mondo’s Super X 720 surface, which provides the optimal blend of energy return, comfort, safety and durability for everything from daily training to the toughest competitions.

Kiefer U.S.A., a Chicago-based leader in the supply and installation of athletic surfacing, will head the team that will install the Mondo variable banked hydraulic track system; James McHugh Construction Co. and Bowa Construction, both based in Chicago, will build the track facility.

Chicago Mayor Rahm Emanuel and Chicago Park District Superintendent Michael Kelly have both praised the venue, which is now under construction in CPD’s Gately Park, and have highlighted the benefits it will bring to the Pullman neighborhood. “The indoor track at Gately Park will create much-needed opportunities for the Pullman and Roseland communities to stay safe, to stay engaged and to stay on track to a brighter future,” Emanuel said in a statement when the project was announced in 2017.

Scheduled to open in 2020, the 134,000-square-foot facility will have an 8-lane sprint track and space for other track and field events, including hurdles, shot put, and long jump. It will seat 3,500 fans and will be able to host other sports, including basketball, volleyball, lacrosse and football. In addition, the venue has been chosen to serve as the new base for the local nonprofit After School Matters, which offers extracurricular and mentorship programs for thousands of Chicago high school students.

About the Mondo Track

With Mondo’s hydraulic banked tracks, the push of a button raises the track’s curves in minutes to the desired height for competitions or training sessions. Once lowered, the tracks are flush with the surrounding surface, so the entire area can be used for other sports or activities. The ease of use in setting any desired incline makes the tracks extremely versatile and ideal for athletes of all levels.

With its vulcanized rubber construction, Super X 720 provides optimum traction while a unique textured bottom layer generates a cushion of air for extreme comfort and allows swifter transitions as the foot rolls from the fifth to the first metatarsus.

Among its other benefits:

Celebrating 70 years of expertise, Mondo is the global leader in the track and field, and indoor sport flooring markets, manufacturing flooring surfaces for virtually every application. More than 1,100 Mondo tracks and millions of square feet of the company’s high-performance athletic surfaces are installed in universities, schools, gymnasiums, weight and cardio areas, multipurpose spaces, locker rooms and more around the world.

Ideal for both training and high-level competition, Mondo tracks are made from rubber and vulcanized to produce a continuous, seamless piece of material that will not separate. More than 270 world records have been set on Mondo’s track surfaces, which in addition to Super X 720, include Mondotrack WS, the competition surface of the Rio 2016 Olympic Games; Mondotrack, the official competition track of the 2008 Beijing and 2012 London Olympics; and Super X Performance, the world’s top track for more than 30 years and recognized as one of the fastest, most durable and environmentally safest tracks available.

Mondo is an official supplier of athletic tracks for the past 11 Olympic Games, has been the competition surface since the 1992 Barcelona Games, and is the official supplier or sponsor of more than 100 sports federations and associations.

A family-owned business since its founding in 1948, the company sells its products in more than 196 countries through Mondo-owned manufacturing companies in Italy, Luxembourg, Spain and China. For news updates, visit mondoworldwide.com, and the Mondo press room, and follow the company on Facebook, Twitter, Instagram, and LinkedIn.

Kiefer U.S.A. is a family-owned company with a history steeped in sports tradition. A Mondo partner for over 40 years, Kiefer prides itself on being a worldwide leader in the supply and installation of world-class athletic surfacing. For more information, visit http://www.kieferusa.com and follow the company on Facebook, Twitter, Instagram, and LinkedIn.