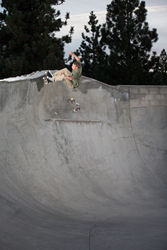 The park is super fun, it’s almost like skating in some weird alternative reality – like skating on Mars - Raven Tershy

Monster Energy presents new “Altitude Sickness” video. For a skateboarding trip off the beaten path, the Monster Energy team paid a visit to legendary Volcom Brothers Skatepark in Mammoth Lakes, California. Mammoth Mountain is a striking locale, complete with expansive meadows, old forests, and jagged rock spires. Fitting that it has a skatepark of equal magnitude.

Nestled into the scenic hillside at the foot of Mammoth Mountain, the Volcom Brothers park is a unique concrete wonderland of bowls, hips, and wall rides plus massive rocks and organic elements for a true taste of nature.

“The park is super fun, it’s almost like skating in some weird alternative reality – like skating on Mars!” said Monster Energy’s Tershy. As Tershy pointed out, the layout of the park blends seamlessly with the natural features and curvature of the environment. “It’s a pretty crazy landscape, they just threw a bunch of concrete over all these lumps and humps.”

At an elevation of 7,880 feet, the thin air took some adjustment on behalf of the skaters, while the park’s organic transitions and hand-poured copings added to the challenge. “It makes it super hard to skate, but super fun and interesting. So when you get a trick, you feel real psyched on it ‘cause it definitely wasn’t easy,” said Tershy.

As the session got rolling, the riders found their groove and each left their mark with fast lines, high airs, creative lip tricks, and never-seen-before transfers under the wide-open skies of Mammoth Lakes.

A huge thanks goes out to Mammoth Mountain and Thrasher Magazine for their support.

For more on the Monster Energy Skateboard team check out monsterenergy.com. For interview or photo requests contact Kim Dresser.