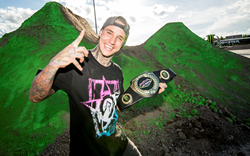 The Monster Energy Cup Championship is much more than a supercross race. Alongside the event was the Pit Party that featured a motocross best whip event, a Bellator MMA fight, a four-wheel smoke show, and set in the middle of it all, the Monster Energy BMX Dirt Jam contest and Toyota Best Trick finals presented one of the most outrageous BMX events ever conceived where 12 of the best riders in the world competed for the title.

Last year the BMX event gave equal weight to speed, style and tricks, but this year the contest featured two separate jams: one that focused on runs and another that focused on single tricks. Each rider rode down a towering ramp before launching off a pair of massive jumps, than had one final chance to impress the judges on a huge quarter-pipe. The first jam was a straightforward battle with the best overall run taking it all. Baldock laid down the hammers in all three runs, but his last run—a corked 720, a 720 tailwhip, and a tailwhip-to-barspin on the quarter—gave him the uncontestable win for the second year in a row.

“I’m super psyched on the win,” said Baldock. “Thank you to Monster Energy for putting this event on; it’s one of those things that you dream about winning two in a row.”

The second jam, "Toyota Best Trick", upped the level calling for just one trick…one banger to take it all. Monster Energy’s Andy Buckworth came out and stomped a no-handed double backflip on the first set early on. Teammate Kevin Peraza sent a 540 to the massive 24-foot second set only blowing up on the rollout, and Baldock attempted Cash Roll after Cash Roll on the last set. But, it was Casey, who on his very last attempt, came through with a double decade over the second set. The only person to ever land a double decade, and only having done it two other times, he was the clear winner among all of the riders and judges.

“The main jam didn’t go that well for me,” said Casey. “I fell pretty much every single run [laughs]. But, when it came down to the best trick jam I landed the double decade and I’m stoked to be walking away.”

For more on Baldlock and the rest of the Monster Energy team visit http://www.monsterenergy.com. For interview or photo requests contact Kim Dresser at (949) 300-5546 or kim.dresser@indiepragency.com.