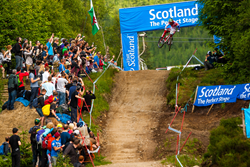 'I just won my first world cup I guess! I can't believe it, it's been a long time coming and I’ve been trying my hardest to get it.'- Troy Brosnan

Monster Energy athletes Troy Brosnan and Sam Hill went 1-2 at the Fort William, Scotland round of the Mountain Bike Downhill World Cup. It was a case of the student becoming the teacher, as Brosnan took home his first ever World Cup win, while his long-time friend, series veteran and Monster Energy team mate, Hill took second.

It was an odd week of racing here in Scotland, as weather threats threw the normal schedule out the window. With their race weekend routines broken, racers had to struggle with 5:30 a.m. wakeup calls for practice and long waits in the cold and howling wind near the start gate for qualifying. Race day dawned with sunshine, blue skies, and even a few sprinkles of rain throughout the day didn’t dampen the spirits of the 18,000 fans in attendance.

With the freshly reworked track running extremely fast and loose, Brosnan managed to shatter the long running myth that this track is for bigger riders.

In the finals, Hill was in first place and spent nine-minutes in the hot seat until Brosnan managed to best Hill’s time by 1.65 seconds.

"I finally put it together,” said Brosnan. “I got the win and couldn't be happier. It's amazing, the crowd here was mental, and to do it at Fort William is great. It shows that little guys can get it done on any track. Hopefully I can take this momentum to Leogang next weekend and get a second win! I knew I could do it again [after qualifying first]. The pressure was definitely there, I just kept it inside. I was pretty calm at the top actually! I just won my first world cup I guess! I can't believe it, it's been a long time coming and I’ve been trying my hardest to get it."

“I knew it was going to take everything I could give and I just tried to attack as much as I could,” said Hill. It felt great, a couple of wobbles here and there, but all in all it was a solid run. I was pumped to come down in the hot seat. Unfortunately, Troy was quicker than me today. He's a good friend of mine and I'm pumped for him to get his first win; but he'd better not do it again!"

Other Monster Energy athletes Josh Bryceland (13th place) Brendan Fairclough (19th place) and Steve Peat (28th place) will be looking to join both Hill and Brosnan on the podium at the next World Cup round in Leogang, Austria.

Visit monsterenergy.com for more on Brosnan, Hill and the rest of the Monster Energy team.