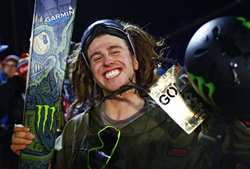 On Saturday evening, the veteran Big Air athlete proved he’s still at the top of his game. Harlaut and five other competitors showcased their best tricks in front of a massive crowd gathered around the 187-foot high jump in downtown Oslo at Tøyen. The field was competitive, but what set the medalists apart was their ability to land clean triple corks or more technical double corks.
The Big Air jump is the first scaffolding jump at a X Games event since the 1999 X Games San Francisco, and the construction—led by Stageco Staging—took 13 days, with 45 people involved in the build out.

After his first run, Harlaut was sitting in 5th place. It was in his second run that Harlaut really upped the ante. Dropping in switch on the 150-foot in ramp, Harlaut threw down a unique switch triple cork 1440 safety to earn the top score of 97.00 and secure the gold.

This latest podium is a huge milestone for Kenworthy, as he joins Tanner Hall and Candide Thovex as the only other ski athletes to podium in all three disciplines: SuperPipe, Slopestyle and Big Air.

For more information, visit http://www.monsterenergy.com this week to score all the exclusive updates from X Games Oslo 2016 including photos, videos, and contest results as they happen. Follow Monster Energy’s Facebook, Instagram & Twitter for exclusive behind-the-scenes looks in Oslo.