Monster Energy, the Official Energy Drink Sponsor of the First Ever Nitro World Games, is Ready to Dominate with its Team of World-Class Competing Athletes 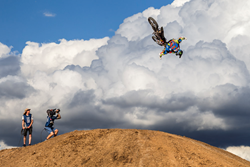 Created by Nitro Circus CEO and Creative Director Michael Porra and extreme sports icon Travis Pastrana, the Nitro World Games will host the best athletes and biggest stars from across the globe in action sports’ most exciting disciplines to include freestyle motocross (FMX), BMX, Skate, inline and scooter, featuring new disciplines, formats, tricks and all new massive ramps along with a Nitro-invented live scoring format to ensure fans can engage with the competition every single minute of the Games. Monster Energy will feature Monster Energy girls and sampling.

Coined as the “biggest event in the history of action sports” by founders Porra and Pastrana, the Nitro World Games is expected to be a riveting three-hour experience airing live during prime time on NBC.

Key Monster Energy athletes to watch out for to see if they will advance include:

In Skate Best Tricks Trey Wood and Jake Brown will be gunning for the podium.

If you can’t attend make sure to tune into the live broadcast on primetime NBC at 8 pm ET and 7 pm CT from Salt Lake City Utah’s Rice-Eccles Stadium.

To purchase tickets and for more information go to http://www.nitroworldgames, and make sure to check out http://www.monsterenergy.com and Monster Energy Facebook this weekend to score all the exclusive updates direct from Nitro World Games including photos, videos, and contest results. Follow us on Instagram and Twitter @monsterenergy. For interview or photo requests contact Kim Dresser.