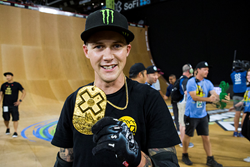 I came out here not even knowing if I could ride. I got hit by a car last week on my motorcycle - James Foster

Monster Energy congratulates the unstoppable James Foster who took gold in BMX Big Air at X Games Minneapolis 2018. In a heated contest that saw eight riders give it their all, it was Foster who reigned king on the biggest jump at X Games with a progressive run that will change the future of the sport. Alex Nikulin, meanwhile, became the first Russian athlete to place top three at X Games in over fifteen years.

Owning as much charisma as talent, Foster showed up to X Games Minneapolis with one goal in mind — to defend his hard won Big Air title from last year. There was just one problem however.

“I came out here not even knowing if I could ride,” he explained after the event. “I got hit by a car last week on my motorcycle!”

That said it is insane and commendable that he even showed up, let alone take gold. However, whatever he was thinking before his second run as he stood atop the 73-foot mega ramp on Friday night might have been crazier than his decision to compete just days after his accident.

“The first time I even thought about doing “it” was about a minute before the run,” he would say, gold medal around his neck. The “it” he is referring to was a mind-bending quadruple downside tail whip he managed to pull off just moments prior.

Foster has been progressing the sport for years, and tonight was just another example of the unmatched progressive and artistic talent the 32-year-old from Redlands, California has.

Choosing to drop into the 65-foot gap, the crowd knew Foster was up to something when he chose a massive Superman seat grab as his set up trick before racing towards the monolithic 27-foot quarterpipe. What happened next caught everyone off guard because as soon as Foster shot off the lip his bike started spinning — two full rotations before he even reached the climax of his air and another two on the descent back toward the ramp, making for a quadruple downward tail whip, a first at X Games.

Speaking to the press after he said, “I only decided I would do it as I dropped in…and it worked!” Foster then added, “And now I have this,” holding up his gold medal, before smiling, “And I don’t have the words to describe how I feel!”

Whether it’s thrilling crowds on the Nitro Circus tour, inventing crazy tricks on custom made ramps or now, winning back-to-back X Games gold, Foster is at the essence of what it means to be a Monster Energy athlete — daring, talented, creative... and just a little bit crazy.