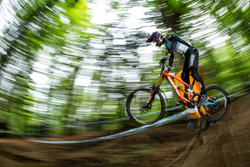 I’m really happy with a second place. I haven’t had a great start to my season in quite a few years, so it’s really good to come away from the first race of the year with a second place and get this year off to the right start - Danny Hart

It’s been nine years since the World Cup visited Slovenia, and everyone was excited to get back to a track that is steeped in history. Known for its roots and steep upper section, riders couldn’t wait to get down to business. Unpredictable weather all week meant riders were challenged both mentally and physically as conditions on track changed almost hourly. Friday practice was dusty and dry, with the newly cut sections of track running mint as the roots came out and ruts started to form. The expected Saturday rain showers held off until mid men’s qualifying and chaos ensued. The once grippy, forgiving dirt turned to ice in sections as rider after rider went down or off course during qualifying runs.

Although racing got started under threatening skies, the predicted rain never came leaving racers with semi perfect conditions as the moisture from the previous day transformed the track into hero dirt with endless grip. Hart managed to put down a heater, placing second place – only .4 off the win getting his season off to its best start in years.

“I’m really happy with a second place,” said Hart. I haven’t had a great start to my season in quite a few years, so it’s really good to come away from the first race of the year with a second place and get this year off to the right start!"

Brosnan put the hammer down after a frightening ride through the rocks the previous afternoon and held it together all the way through the line, stopping the clock with a time that was good enough for third place.

“I'm super happy,” said Brosnan. I normally really struggle with the first race of the year. I don't know if it’s pressure or just not the greatest preparation, but I think fourth place is the best I've ever done. To get third with a really good run and so close to first makes me super stoked. It's been a really big off-season. Aaron my mechanic and I have put in so much work and it’s really paying off. I'm looking forward to the next stop at Fort William."

American Monster Army rider Charlie Harrison put down his best result ever with a fourth place finish and his first ever World Cup podium.

"I'm so happy this is insane,” said Harrison. Just to be able to stand on the podium with such talented guys is insane. Everything went so good this weekend. My bike is running awesome and I’m just kind of riding the wave. I knew I could do well, but to actually do it is kind of insane. I’m super stoked."

Monster Energy’s Mark Wallace (CAN) held on, stayed calm and managed to crack out the best qualifying run of his career for Sunday’s racing, which landed him in 8th place.

“All in all, a pretty good week I'd say,” said Wallace. I obviously wanted a bit more in finals, but everyone else was pushing hard and put in a good one. I am happy with my own effort and will take it into the next one."

Riders now have four weeks off until the next World Cup round in Fort William, Scotland in early June.