Monster Energy would like to congratulate Evan McEachran for earning the coveted win in Ski Slopestyle Finals at the Winter Dew Tour in Breckenridge, Colorado on Saturday. 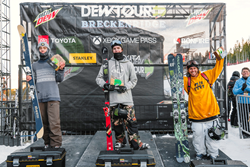 The rails were definitely pretty intense, but they allowed for a lot of different options, and different transfers, which was really cool - Evan McEachran

Monster Energy would like to congratulate Evan McEachran for earning the coveted win in Ski Slopestyle Finals at the Winter Dew Tour in Breckenridge, Colorado on Saturday. Henrik Harlaut claimed third in the event that saw some of the most progressive freestyle skiing to date.

McEachran, 21, earned his first Dew Tour win for his absolutely flawless skiing on the jumps and rails. Hailing from Ontario, Canada, McEachran took to the course in Breckenridge with confidence and unleashed a series of super smooth, technical tricks.

On the jump section, McEachran scored a 92.33 on his second run that included a left double 1260 with a nose/tail grab, backed up with back-to-back double 1440s with locked in grabs. This high score put him third place going into the rail portion of the contest.

On the jibs, McEachran proved unstoppable, as he upped his score in all three attempts. On his third and final run, the freeski phoneme put down run that included; a switch butter 720 on the first rail, to a switch 270 on to 450 out on the donkey tail. This run scored a 94.67, which was the highest rail score of the day, and gave McEachran a total score of 187.34 to secure the big win.

“The rails were definitely pretty intense, but they allowed for a lot of different options, and different transfers, which was really cool,” said McEachran following the event.

On earning his first Dew Tour win, the 21-year-old was visibly amped and said, “I was having so much fun today, the weather was perfect, and everyone was skiing so well. This is just mind-blowing! I’m insanely excited, and can’t wait to celebrate tonight!” he continued.

Fellow teammate, Harlaut also skied incredibly well, and earned a total score of 181.67 for third place. Harlaut put down the first triple of the day in a pretty crazy run which included; a left belly down double flat 1260 (lobster flip), switch right double 1080, to a switch triple orbital 1260 critical. This scored an 89.67.

On the rail section, Harlaut really shined and put down a series of technical rail trickery that included: switch tails blender on, to nollie front 270, to 450 on and off. This scored a solid 92.

“It’s awesome to have rail courses be a little bit gnarlier,” said Harlaut after the event. “It’s gives you a little bit of extra motivation to try harder. I think everyone skied really, really well and today was awesome,” he continued.