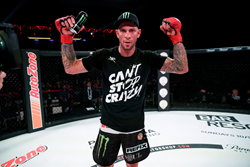 I’m in a growing phase of my career right now. I’m doing a new sport. I think that I’m improving a lot. I think it’s pretty undeniable that I’m going to be a force to be reckoned with real soon - Joe Schilling

Schilling, who is making a name for himself in MMA with a recent win streak of 2-0, is quickly developing into a scary prospect for Bellator’s fight roster in the middleweight division.

“I’m in a growing phase of my career right now, said Schilling.” I’m doing a new sport. I think that I’m improving a lot. I think it’s pretty undeniable that I’m going to be a force to be reckoned with real soon.”

Coming off his Bellator 210 win last November, Schilling (4-5 MMA, 3-2 BMMA) was dead set on continuing his MMA-win streak, promptly dropping Berry (15-15-1 MMA, 2-4-1 BMMA) early in the contest. Not able to finish the fight with his fearsome strikes in round 1, Schilling was forced to dig deep, grappling against the cage and utilizing his ground game for the three-round decision win.

Round two opened with another infamous heavy Schilling leg kick and then Berry securing yet another takedown. Schilling showcased his ever-improving ground game and eventually escaped however, landing another front kick to Berry’s face while throwing a couple of thudding blows.

Early in the third round Berry tied Schilling up against the fence, landed an outside trip, and quickly moved to full mount. Schilling negated most of Berry’s offense from the top, and then finally reversed, transitioning to top control, which he would command until the culmination of the fight. Schilling impressed with formidable ground and pound, landing his signature elbows and sharp lefts to Berry’s head resulting in a gaping gash above his eye that bloodied his whole face and the cage canvas. After two competitive rounds, Schilling’s bloody damage to Berry in round three left little doubt as to who the victor was.