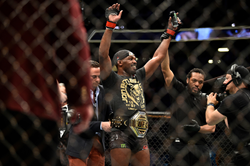 Hats off to Anthony Smith. His reputation is to be so durable. Now I see why they call him 'Lionheart'. I have never had anyone talk to me while I'm hitting him. This guy is so durable. He's like the Terminator - Jon Jones

Smith earned himself the opportunity to fight the greatest mixed martial arts (MMA) fighter ever by facing Jones, as one of the biggest betting underdogs, but also lived and learned as he endured a 25-minute physical deconstruction as Jones soundly and technically outfought Smith over five lopsided rounds. ‘Bones’ ultimately winning by a resounding and unanimous decision with identical scores of 48-44 on all three cards.

Jones (24-1, 1 NC) made it look easy as he pragmatically took apart Smith, who stubbornly toughed it out until the end earning Jones’ ultimate respect. Smith also took a knee when he was down from Jones late in the fourth round and could have chosen to end the bout, but chose to continue the fight not wanting to take a win via disqualification.

"Hats off to Anthony Smith. His reputation is to be so durable. Now I see why they call him 'Lionheart,'" said Jones. "I have never had anyone talk to me while I'm hitting him. This guy is so durable. He's like the Terminator.”

Jones systematically broke down Smith with creative setups and debilitating strikes to the body and legs completely controlling and dominating the fight, but in the end was disappointed he wasn’t able to finish Smith and apologized to his team and fans after the fight.

What’s next for Jones? The UFC light heavyweight champion said Israel Adesanya could be his next opponent after defending his title against Smith. Thiago Santos – nicknamed “Marreta” also seems to be the frontrunner, but lets not forget the allure of heavyweight fights with Daniel Cormier or Brock Lesner.