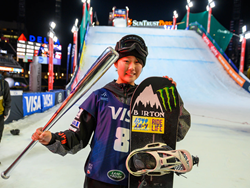 Made possible through a partnership between the Atlanta Braves Major League Baseball team and official governing body U.S. Ski & Snowboard, Visa Big Air transformed SunTrust Park stadium into a snow sports mecca. The center of the action was a 15-story jump structure comprised of around 30,000 pieces of steel and covered in 800 tons of artificial snow during the two-day event. Riders dropped in from the top of the scaffold structure to hit a snow jump, covering a distance of over 70 feet at speeds up to 40 miles per hour.

With the world’s best aerial experts gunning for the top spots – including several Olympic medalists – here’s how the action unfolded inside the home of the Atlanta Braves this weekend:

But during practice right before the final, Anderson suffered a heavy fall, injuring her head and shoulder. The 29-year-old snowboard icon from Lake Tahoe, California, had to pull out of the competition but soon let her 500,000 followers on Instagram know that she was going to be okay.

She added to the score with a backside 720 mute over the gap for 76.75 points, bringing her total to 159.5 points for a strong second place behind Iwabuchi.

Kokomo Murase has counted among the upcoming riders to watch on the international snowboard big air circuit since her upset victory at X Games Norway 2018. Only 13 years old at the time, Murase clinched the win in a field of seasoned veterans, including freshly minted Olympic medalists, while at the same time making history as the first girl to land a 1260 double cork in a competition. Hailed as one of the new faces of snowboarding progression, she took silver in Women’s Snowboard Big Air at X Games Norway 2019 in August.

When the action moved into the Women’s Ski Big Air final on Saturday, all eyes were on Monster Energy’s Giulia Tanno. But it was an uphill battle for the 21-year-old slopestyle and Big Air specialist: Struggling with a cold all week, Tanno skipped most practices on previous days and limited her attempts to feeling out the jump with straight airs and switch 180s.

Adding to the challenge, heavy rain blanketed the stadium in Atlanta for most of Saturday’s qualifiers, creating difficult riding conditions. Nevertheless, Tanno persevered and qualified into the final in first place. In a field of the top six qualifying riders, Tanno revisited her rivalry with fellow Swiss freestylist Mathilde Germaud as the two went head-to-head on best trick attempts.

In front of a high-energy crowd that braved the inclement weather at SunTrust Park, Tanno opened her final performance by sending a technical left double cork 1080 safety grab over the massive snow jump for 88.25 points. On her second attempt, she stoked the audience by stomping a switch left 1080 tail grab – hitting the jump riding backwards – for 87.5 points. With a total score of 175.75 points, Tanno finished in second place, five points behind Germaud in first.

Her current first place on the Big Air leaderboards caps off a spectacular season for Tanno. She graduated from Sportmittelschule Engelberg college in June 2019 and has devoted all her energy to freeski training since. And it shows: Only one week ago, Tanno took a podium spot at the world’s biggest aerial spectacle in winter sports, the 2019 Air + Style Beijing FIS Snowboard World Cup, where she finished second.

Download photos for editorial use.
Big Air fans in the United States who missed the action in Atlanta this weekend can watch all podium runs on the official FIS Freeski YouTube channel and FIS Snowboarding YouTube channel.

Also look forward to catching the entire Monster Energy snow team at the world’s biggest winter sports festival in only a few weeks from now: X Games Aspen will bring together elite athletes across ski, snowboard, snowmobile, and snow bike disciplines from January 23-26, 2020 at Buttermilk Mountain resort in Colorado.