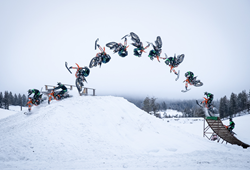 Witness history in the making in a new video clip showcasing the world’s first-ever front flip aerial performed on a snow bike by Monster Energy athlete Kyle Demelo. At his Camp H training compound in the Okanagan region of British Columbia, the 27-year-old freestyle rider became the first athlete to land the highly technical maneuver clean off a super kicker ramp into a snow landing.

“It was actually a friend of mine that challenged to the idea of this front flip,” said Demelo, adding: “So I put the work in and figured it all out.”

It’s a hard-earned triumph after a long battle for Demelo. Freshly signed on the Monster Energy team at day one of X Games Aspen 2019 in January, the seasoned motocross stuntman knew he had the trick in his arsenal. Plus, unveiling it in competition would be a sure-fire gold medal win. On his first attempt, Demelo fully committed to sending the move over the super kicker on live television, but crashed after under-rotating the 250-pound snow bike.

While Demelo emerged from the crash unscathed, his bike did not. With no rideable snow bike and one more attempt remaining to make history, Demelo called on his new Monster Energy teammate, Brett Turcotte. Already sitting comfortably in second place, Turcotte loaned Demelo his bike for another try. And it was a close one: Completing the full front flip rotation, Demelo landed slightly too far on his rear tracks and lost control of the landing. He took a heavy slam, also wrecking Turcotte’s bike, who now had to sit out his second run, but still ended up with X Games silver.

End of story? Not for Demelo. Back at his private Camp H compound outside of Oliver, British Columbia, the all-round motorsports enthusiast used all available training tools to make a push towards landing the elusive trick. Camp H is a motocross freestylist’s dream with a plethora of jumps and dirt tracks during the summer, and the training ground for Demelo and snow bike pioneers such as Turcotte and Robert Haslam in the winter.

“It’s basically a dream facility for action sports like motocross, mountain bike, snowmobile, snow bike – anything you can think of, we can handle it here,” said Demelo.

Accompanied by the Monster Energy media team, Demelo set up a super kicker into a foam pit landing to safely practice his front-flip rotation. After landing the move consistently into the foam pit a few times, it was on: Demelo called in a local snow caterpillar crew to mold a snow landing and proceeded to try the front flip with no safety net. On his first try, he stuck the full rotation and rode away clean, making it the first time a landing of this trick has been documented outside a foam pit.

“We just did it! First front flip on a snow bike. This is sick!” said Demelo upon landing the trick, before launching into a spontaneous victory celebration with his pet goat, Gouda, who has over 1,700 Instagram followers under @goudathegoat.

Demelo’s history-making move is an important milestone in the evolution of snow bike freestyle. The relatively young sport adapts aerial spins and acrobatics known from motocross to the snow – but it’s still exploring its boundaries. In terms of equipment, there are no standardized snow bikes. Riders design their own custom conversion kits to transform motocross machines into freestyle-ready snow bikes with rear-mounted track drives. And what’s more, athletes like Demelo and Turcotte continue to push the limits of what stunts are humanly possible on snow terrain.