Monster Energy congratulates Michael Chandler on reclaiming the lightweight title from Brent Primus, and becoming the first three-time Bellator Champion at Bellator 212 in the main event on Friday night at the Neal S. Blaisdell Center in Honolulu, Hawaii. 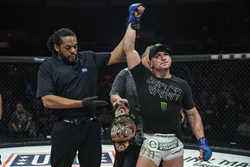 This belt was not won easy tonight - Michael Chandler

Monster Energy congratulates Michael Chandler on reclaiming the lightweight title from Brent Primus, and becoming the first three-time Bellator Champion at Bellator 212 in the main event on Friday night at the Neal S. Blaisdell Center in Honolulu, Hawaii.

With the win, Chandler avenged his alleged ‘fluke’ loss to Primus from their last June 2017 Bellator match in New York when he surrendered the 155-pound title to Primus via a first-round TKO. At the time Chandler had suffered an ankle injury in the opening round and tried his best to compete on one leg, but the referee stopped the fight.

For Bellator 212 Chandler came hungry and ready to reclaim his title. After a hard-fought battle he secured a unanimous decision (50-45, 50-45, 50-45) in the main event rematch. At 19-4, Chandler is now a three-time Bellator lightweight champion and breaks the tie with Eddie Alvarez, a feat hardly any other fighter has done.

For the first round Primus came out throwing a lot of kicks, but Chandler dropped Primus with a massive right hand, mauling his rival to the ground with early takedowns and asserting his superior wrestling skills refusing to let Primus return to his feet. In the second round Chandler dominated most of the match except the early portion when Primus threw a left hook and immediately cinched a rear-naked choke. The experienced veteran was able to get free and assume his top-position assault pinning Primus back down on the ground.

For the third round Primus landed a few hard shots on the feet, but it took just under 90 seconds for Chandler to put Primus back down and once again started grinding away on the champion.

For the fourth and fifth rounds Chandler’s wrestling pedigree paid off and he had Primus back down controlling most of the fight with his ground-and-pound. When all was said and done, Chandler swept the three judges scores and resumed the lightweight title to become arguably the most accomplished fighter in Bellator MMA history.

"This belt was not won easy tonight," Chandler said during his post-fight interview as a nod of respect to Primus.