Monster Energy’s Sam Hill (AUS) slashed through the dust and rocks to a second place finish this weekend at the penultimate round of the Enduro World Series for 2019. 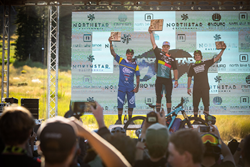 I wasted the win, but will have to settle for second place and some very important points in the championship. Sam Hill

Monster Energy’s Sam Hill (AUS) slashed through the dust and rocks to a second place finish this weekend at the penultimate round of the Enduro World Series for 2019. Right behind him was Monster’s Mitch Ropelato in third at his first EWS stop of the season.

In what ended up being the closest racing in EWS history, the Australian battled through familiar, almost home like conditions to include loose dirt and choking clouds of dust. With gnarly rock gardens on almost every track, a "who dares wins” permeated the air all week as racers knew they would have to go for broke to have any chance of taking home a podium finish. It came down to under a second. Hill was 0.8 behind the eventual winner after 6 stages of racing, but won enough points to maintain his solid second place overall ranking with just the final round to go in Zermatt, Switzerland at the end of September.

“I had a great race at Northstar! I got a few stage wins and I felt like I rode solid all weekend. I really enjoyed the rocky, dusty conditions and the crowds made it awesome cheering for us all week. I wasted the win, but will have to settle for second place and some very important points in the championship” the Aussie legend commented afterwards. He made the task of winning a third consecutive championship seem easy, explaining “I just have to win the Queen stage and the race, and the title is mine, no matter what!”

Monster Energy’s Jack-of-all-trades when it comes to two wheels, Ropelato has been on a tear lately. After multiple victories across different disciplines last week at Crankworx, and taking home the King of Crankworx title, Ropelato was thrilled at getting onto his first ever EWS podium at home in the USA.

“Today was fun! The tracks were gnarly, but I just channeled my inner demons, said Ropelato. I’m so happy to get on the podium here at home in the States!”

The final round of the EWS series will decide the championship this year at a new venue in Zermatt, Switzerland on September 21.